Book Review: Everything Broken Up Dances by James Byrne 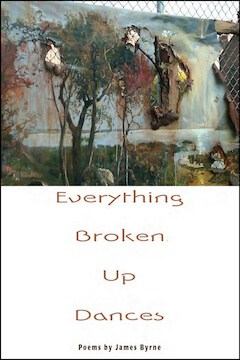 Everything Broken Up Dances by James Byrne

James Byrne travels far and wide in this collection with poems about Syria, Libya, Burma, Europe and the U.S.  He writes of political tension with acknowledgement of the complex histories and cultures in a range of poetic forms, taking a position of observer. He includes names of remote places with Arabic words and phrases with clear descriptive detail to bring these places into focus for the reader. These are poems to expand a worldview, and Byrne writes passionately about people affected by political turmoil.

In “Improvisations For Adam-Baiting,” Byrne writes a crown of terse, short-lined sonnets about political corruption and historical colonialism in Burma. He ends with an indictment of the sex trade in Bangkok in “Money”: “the callgirl’s uncontrollable/smile-tithed as they are/to trafficking and the plow/of weekend millionaires”.

Byrne is at his best in his poems about Syria and captures the nuance of a police state. Byrne visited Syria in 2009 and experienced the tight control of the Assad regime as well as a time when the country was fairly accessible. His poems of current Syria are devastatingly terse and beautiful. Byrne writes: “Families hide out for months/in their home; insomnia-riven/betrayed by the dark/and the painted/irreality of television/thump onto hard rock.”

In the prose poem “Mallajah”, a town in northern Syria near Aleppo, Byrne weaves Arabic words with run-on phrases of rapid images and experiences of the foreigner in a new environment: “President Assad like a king with a million eyes, a million ears-translation: please habibi-not the poem about Iraq.”

Assad’s pictures were posted everywhere in Syria, in shops, sides of buildings and windows, so his eyes are indeed, unavoidable, as are the secret police. The poem reminds us this is a place where political discussion is illegal and dangerous.

Impossible to read these poems now and not to think about the atrocities happening in Syria as one writes. The bombardments, the disappearances, the tragedies. The power of these poems is in the fact that Byrne doesn’t offer false solutions, his language doesn’t give us face proclamations or pretends to solve problems as political poems sometime do. If his poems offer any kind of healing they do so by their imagery, by their music, by their unpatronizing honesty. This is of course also true of his poems that focus on other parts of the world.

This is a memorable collection of vivid poems in a wide range of form, which cover a large geopolitical range that alerts and warns us: that this world is complex and inter-related, and we are all part of it. How to go on? What is our part as we read these poems in our comfortable American backyards? What is our perspective, our response, our understanding? Not everyone is guilty, as Dostoevsky once said, but everyone is responsible.