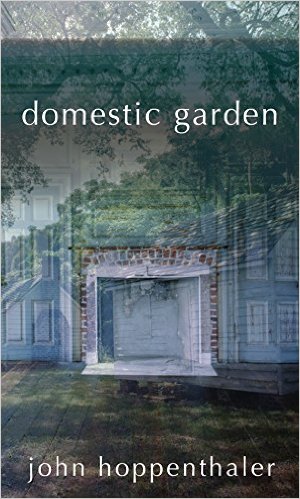 John Hoppenthaler is an American poet, professor, and editor. Domestic Garden is his third collection of poetry. His first two collections Lives of Water (2003) and Anticipate the Coming Reservoir (2008), both also published as a part of the Carnegie Melon Poetry Series, proved Hoppenthaler as a poet who is capable of taking personal moments and through beautiful lyric force and distillation, making them into persona poems that are a part of the deep waters of our collective human consciousness. This third collection uses gardens as a larger metaphor, but the poems are still, as Dorianne Laux writes, “poems of place and witness … [which] ripen necessarily—born out of what they contain, a twice-rich harvest.”

One of the controlling themes in Domestic Garden is growth. That growth may be in the form of the speaker’s relationship to the domestic, the growth of undesirable weeds or pests like death and disease, or the succulent fruits of a domestic life. Growth plays parts in all five numbered sections of the book, and in the poem which prefaces the first section and introduces the reader to the speaker’s world. The title poem, “Domestic Garden,” begins:

A ghost has disarranged these roses
………………lining the walkway. Some greenhouse
…………………………….jokester must have switched

Beginning with a ghost, Hoppenthaler implies that death, much like the archetypal death card in tarot, is not an ending, but a phase of renewal. It foreshadows a new way of seeing. It prepares the reader for how to read the collection much like the epigraph selected from Keetje Kuipers which reads “If the garden is not a garden, and if its tiny lamps illuminate only their own darkness, we must hold ourselves inside forever” (11). This supports the reading of Hoppenthaler’s work as moments of self-reflection and the use of persona to illuminate others. In order to do that, growth is required and that continues in the rest of the poem as the persona speaks directly to the poet, immediately denying his own declarations:

& you aren’t really gone, except in the way
……………..presence sometimes contradicts itself.

The supernatural nature of this sort of invocation is reflected in the poem’s diction (“ghost,” “heaven,” “magic,” “spirit away”) and on the book’s ghostly cover.

The first section continues with bits of the surreal, but it is grounded with narratives. The use of tercets in three of the poems in this section also evokes a holy quality. There’s the opening poem of the section, “The Garden of Eden.” It’s set in New City, NY in 1965 and depicts a man and woman, presumably the speaker’s parents, setting up a domestic life, creating their own Eden:

…It couldn’t be said
that times weren’t tough, but they ate often
from the garden. Weather rarely let them down.

They weren’t religious, but it pleased them to think
of that other garden. They’d come to see themselves
as whom you’d already guessed, & had gained

all the knowledge they’d ever need, as they saw it.
“It” being the gradual process of growing
old while their children gorged themselves on the ripest fruit. (18)

The speaker refers to the biblical Eden as “that other garden” and refers to their foresight of familial success as “all the knowledge they’d ever need” to extend the metaphor into a form of personal mythmaking.

The major narrative thrust of this section really comes from the sequence on the death of an uncle, its effect on the speaker’s mother, and how the corresponding effect on the speaker allows him to connect, through somewhat shared history, with the poet Elizabeth Bishop. The sequence begins in “Sleeping in Elizabeth Bishop’s Bedroom” when the speaker taps into the psychic energy of the room “next to the room of her mother’s / scream” and hears “the church bell clanging,” is “awakened to fire,” and an “urgent hushing” (22). “Home Movie,” the next poem, eerily places the speaker in front of a Super 8 film projected, on repeat, of he and his uncle Eddie one month before his uncle’s death. His mother’s reaction to the death, “I can see my grieving mother / almost losing her grip, her mind,” is visually layered over the repeated image of the uncle/nephew pair casting a fishing rod from the grass of their front lawn into the road (23). The lyric moments in this poem resonate deeply in lines like “In Romania, she’d raised him like her own, / now couldn’t raise him again” (23). The final poem in this sequence, and this section, is one of the most masterful in the collection. “Side Porch of the Elizabeth Bishop House” begins with an epigraph from Bishop’s “In the Village,” a story inspired by her own mother’s mental breakdown after the death of her father. The line reads, “the scream hangs like that, unheard, in memory.” Hoppenthaler artfully cuts between lines and descriptions from Bishop’s story of the spaces he currently sees alongside a narrative of the speaker’s mother, nearly catatonic after her brother’s funeral, and back again until Bishop’s mother’s scream becomes his mother’s screams, becomes his own screams as a child frightened at his mother’s state, and finally becomes the screams that a guilty son hears when he lies to his mother after a stroke in a nursing home. It plays out and works as an imagistic palimpsest full of texture.

The remaining sections focus on the speaker as an adult and the developments of his own domestic garden: a time alone and with friends & family searching (tilling the land), falling in love and getting married (planting in the garden), raising a stepson (tending to the garden), a slight resistance to the domestic life (growth of weeds), and coming to terms with the work and acceptance of the joy of the garden (the fruits are worth it). The final section is even able to do what many books of poems do not: become fresh again. The poem “Some Men” lists, with visual detail, alternative types of men who don’t have gardens of the domestic— perhaps some even alternate versions of the speaker’s self. This section has the most lyric poems and wonderful sequence of linked verse poems titled “Anna’s Garden” which alternates between the sonnet and haiku forms. The final poem resolves the arc with the speaker acknowledging, “I’ve given in, my love, to desire so that I might die fat in your arms” (77).

Most of the poems in the collection are populated with various flora, fauna, and some of Hoppenthaler’s poetic influences or inspirations including Fred Chappell, James Harms, David St. John, Tomas Tranströmer, and even Woody Guthrie. Still, what might need to be most acknowledged is Hoppenthaler’s use of lyric vision akin to the aforementioned Elizabeth Bishop, but with a 21st century twist. Instead of zooming in or panning over details, he holds on them for a moment and cuts to another angle or another shot, allowing the sharper details to linger in the reader’s periphery as the action of the poem continues. The poem “A Walk by the Old House before Visiting the Nursing Home” serves as a perfect example of this. Before visiting his mother, the visual is cued as the speaker walks:

Keep an eye on every crack
in the sidewalk. The rosemary

has grown enormous. One might grind
a spring under a sneaker; later it laces

The image of the speaker’s shoes avoiding cracks on a pavement is emphasized and the laces of the shoe are used as a transition. This works similar to a visual match cut used in film while simultaneously using the homophone “lace” as a conceptual cut. A few lines later, the visual returns to the shoes which become a metonym for something larger:

You’ll break your mother’s back & then some.

See how awfully she wants to go home?
She envies you the ratty sneakers,

how just now you seemed capable of anything. (33)

The speaker’s name is replaced as “ratty sneakers” not by an aging mind, but out of a somber jealousy. The shoes in this poem represent access, represent the outside world and the ability to walk and wear out your shoes ‘til they are “ratty.” It’s a tender moment that resonates long after the collection is closed and finished.  That’s the wonderful thing about Domestic Garden and John Hoppenthaler’s work in general. The poems aren’t merely clean and truthful; they are crafted and full of Truth. Nothing is simple, there’s always a haunting turn whether it’s nested in the line’s integrity or visually shown in a payoff from an earlier setup that leaves readers slightly unsettled and with a desire to read more.