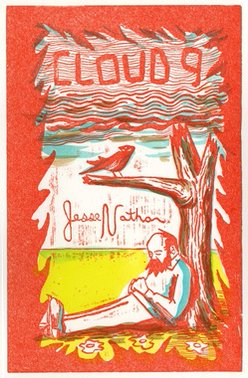 I enjoy a good disavowal; they reveal more than they deny, they create a bit of negative space by which one can be defined. Reading Jesse Nathan’s Cloud 9 (Dikembe Press 2015), I am perhaps strangely, perhaps not, reminded of this disavowal, of Americanness, from Frank O’Hara:

Now I am going to lie down
like an expanse of marble floor
covered with commuters and information:
it is my vocation, you believe that,
don’t you? I don’t have an American
body, I have an anonymous body, though
you can get to love it (“Grand Central”)

The dichotomy between “American” and “anonymous” is the space Cloud 9 occupies—wherein the poet’s vocation is to remain expansive and solitary among the vast human throng of our urban spaces, to be observer and betrayer of the people and “information” that cover him. Nathan, an editor of McSweeney’s Poetry Series, has crafted a slim collection of lyrics in which we, as readers, “can get to love” a poet-speaker with whom “we see / ourselves alone / in strange crowds” (“Know only …”), alone in an America that “is bad poetry / and good nonfiction” (“Broke in D.C.”), an America where facts outmaneuver beauty. You believe that, don’t you? I do not mean to say that these poems are O’Hara imitations—far from it—but I want to offer O’Hara as a model for the kind of museum-attending flaneur that I also see in Nathan. Not only that—this chapbook recalls O’Hara most acutely when its invocations seem at once intimate and alienated, when the “you” of the reader is addressed in an improbable seduction, as in the poem whose title is, presumably, the poet’s email address:

The only place I have been
is here, nowhere,
a series of letters that dream
of correspondence,
the ghost mailbox. I loved
those terrifying wind chimes
just before a summer storm.
I’m hidden for years
mumbling que te vaya bien in a city.
My permanent address?
The warm dent in the pillow
where your head rests. (“nathanjz2003@yahoo.com”)

It can be a dizzying space to occupy, this “nowhere” where language only dreams of correspondence, where solitude is intrinsic to the city of casual goodbyes where the speaker has hidden himself for years, but it is perhaps ultimately satisfying, reminding us we are always either alone together or alone with our thoughts, that lyric crowd.

The other poems in this chapbook are wonderfully varied, not seeming rote nor habitual; one can feel the poet essaying a form, a vessel for his voice. Where so many collections seem to delight in a formal monotony, boredom and predictability, Cloud 9 is formally restless and, often, rigorous. The book begins with four brief lyric fragments, untitled, that lead into a section of longer lyrics titled “Re:”. Although the subject matter of these core poems is consistently clustered around meditations on love and life’s other errors, and consistently set in locations that become familiar such as metropolitan museums or rural Kansas, Nathan’s formal variation reveals a poet for whom language is texture and temperament, accuracy and imagination. He describes: a “precision of dreads” (“Irena”), “the panic element / of sex, the marvelous panic, the hoarder’s / closeness of gorging the flesh” (“On Love, On Representing It”), and “the scent of wet cunt, / the scent of a tarp left months in a shed, / a summer task” (“In McPherson County”). He is a poet for whom

Nathan’s vocation seems to be this kind of watching, tinged with a ruinous muse. He sees “many bad portraits” in the free museums of Washington D.C. (“Broke in D.C.”), “Babies and ripe tomatoes in late October” (“Earth Took of Earth”), a World War I solider “in the mud of Flanders / crying up at the stupid clouds / of Europe” (“Outside the War”), a “youngish girl” faint “in the Cubism room / wearing white heels” (“Brother of Pablo Picasso”). The speaker of “Re:” watches their “dad drown / a litter of kittens he found / awriggle in the straw”; the speaker of “July 11” has a vision of Philip Seymour Hoffman “selling peanuts / At the baseball game walking the aisles / In a flat-brimmed blue hat … Looking maybe not so happy.”

However, the poems that are most evocative are those that abandon realistic perception and enter, instead, a kind of ekstasis or ecstatic vision disconnected from realism. Although, as in O’Hara, this visionary quality is tempered and muted, both by the speaker’s certainty, his calmness of syntax, and by the peculiar details of contemporary life, a beyond-the-body feeling persists. Consider the end of “Paintings,” where a representation of Amsterdam in winter leads the speaker here:

Next day I wake, 4 am
with an image of a wheat field
glowing below a murder
of commas

The “murder / of commas,” not crows, is an image of the textual sublime that is simultaneously strange and accurate, recalling the representative failures of language while not beholden to any such simple purpose. Or consider the end of “nathanjz2003@yahoo.com,” that strange lyric of ghost correspondences and summer storms quoted above, in which the speaker writes to a self he has seemingly just discovered:

The storm cuts to poorly-lit
skirmish scenes, twitching
strobe, rolls its boulders,
a cannonade over ticking
oil jacks, miles of grain—
and what part of me
is me?—
meaning I guess
I carry the carol of death,
an heirloom in a chest.

These last two lines betray Nathan’s skill with alliteration, assonance, and even slant rhyme, a rare pleasure in a chapbook where O’Hara’s melodies of the intimate conversation are more dominant than are, say, the melodies of Hopkins; although, of course, as in O’Hara, the conversational style is not plain nor is it artless. At the end of “nathanjz2003@yahoo.com,” though, I see the poet freed from the burdens of physical representation. The “carol of death” seems another kind of disavowal, not of the world outside the self but of a more familiar self identity, a self behind or beneath or within the self. Watching the storm’s “skirmish scenes,” the speaker finds a truer song of disembodiment, of the acceptance of death, locked as though in a chest inside him—a song that is more him (“what part of me / is me?”) than the part that fears the storm.

Finally, the taste that lingers in the mouth after reading this chapbook is optimism, joy, a lighthearted fraying at the seam of emptiness that imbues all movement with something like intimacy. Even the ruinous muse is sung in an uplifting key. For Nathan love is possible, the world is not irredeemable. The chapbook, in the first lyric fragment, begins by asking the question, “Mr. President // what will end / our sadness?” The President, it turns out, is a false ironic authority on this matter of our sadness; instead, the following poems tell us, the anonymous poet knows that the answer lies in the lyric life, observation, solitude, beautiful estrangements. The chapbook thus enacts an end to sadness. When the speaker and his lover look upon a decaying squirrel “with a beard of flies,” he remarks: “it is not gross, and it is not sad” (“I’ve asked a woman for a kiss—the oak outside is tinged with red—”). This is the foundation for Nathan’s poiesis, an unequivocal disavowal of the “gross” and “sad” that often fill our attentions. It is a mode of making that we, as readers, would be wise to attend to.