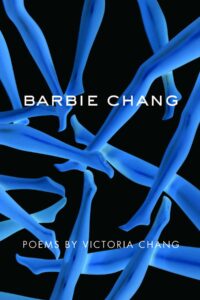 Barbie Chang, Victoria Chang’s fourth collection, makes use of a voice American Poet has aptly called “equal parts searing, vulnerable, and terrified.” The eponymous character is somewhat reminiscent of John Berryman’s Henry—that darkly, often hilariously self-excoriating voice, that dizzily off-kilter way of seeing oneself and one’s surroundings. But where Henry’s great obsession is with the self in isolation, Barbie Chang’s is with the self as it exists within and against a larger sociopolitical context. In this way Barbie Chang becomes a markedly contemporary figure, one whose isolation comes from her conflicted participation in the wider world.

Before the first numbered section of the book begins, “Once Barbie Chang Worked” gives us our first introduction to the character:

Once Barbie Chang worked on a
street named Wall

once she sprinkled her yard with
timed water once

she wore lanyards in large rooms
all the chairs

pointed in the direction of one
speaker and a podium

once she stood up at the end to
leave but everyone

else stood up and began putting
their hands together

and that started her always wanting
something better

The poem sets us up to understand Barbie Chang’s desires and dissatisfactions as at once personal and social: no longer content with a life on Wall Street, she begins “always wanting / something better,” where something better is understood to be a life in which she can be the center of attention, the “one / speaker” at the podium for whom everyone else claps, the magnetic pole toward which each chair points.

Even in this nascent moment, though, we sense something fundamentally wrong. Barbie Chang seems always already on the outside: she’s not a part of Wall Street but rather someone who “worked on a / street named Wall,” a strange phrasing that defamiliarizes the name. Meanwhile she sees not people clapping but an odd and unexpected ritual in which “everyone // else stood up and began putting / their hands together.” In both her old life and her desired new one, Barbie Chang seems perpetually apart. This sense is further developed in the collection’s next poem, “Barbie Chang Parks,” which opens with the kind of playful linguistic pirouettes that will shine throughout the collection:

Barbie Chang parks next to the
Soroptimist Park

to part her heart a hippopotamus
of a heart a potomac

hurt why unearth her high school her
children unearth

everything with their fingers and
plastic shovels

Beneath the playful language there’s a deep sense of alienation, of a character trying to deal with her “hippopotamus / of a heart,” to use linguistic play to cover over “a potomac // hurt.” But this associative, sonically-driven mode is quickly abandoned when Barbie Chang’s thoughts turn to “the Circle,” the group of “beautiful thin mothers at school” who appear throughout the collection and at whom Barbie Chang looks with a mixture of longing and dread:

the beautiful thin mothers at school
form a perfect circle

the Circle will school her if she lets
them they have

something to say doves come out of
their mouths that

explode into splinters in the sky
Barbie Chang knows

hints of fingerprints on the window
but no more fingers

Behind this “allergic” reaction to the Circle we sense a legitimate threat of erasure: with no individual identities, acting and speaking as one, they represent the dissolution of individuality. (Indeed, in a later poem, we learn that Barbie Chang is “afraid sick of the Circle since / she heard of their // shopping for matching dresses”). If Barbie Chang lets the Circle “school” her, she may end up as just another faceless component of it.

At the same time, though, we sense that Barbie Chang’s complaints are not entirely legitimate: how can she claim to be “unnoticed” by the Circle if they Skype with her every day? And if their “school[ing]” her represents a threat, it also represents an offer of initiation—come be one of us, we’ll teach you how. The implication is that Barbie Chang’s isolation is in some ways self-imposed: through it, she can imagine herself as “the last leaf on the / last tree.” Lonely, yes, but special—not unlike the solitary speaker at the podium she has dreamed of becoming.

Some days Barbie Chang wants to
hang up her Asian boots

devours first there are towers of people
working in America

the door of the tower someone keeps
lowering her down…

And in almost the next breath, she can fantasize about getting to do the sort of gatekeeping she’s just critiqued:

she wishes to win the Guggenheim like
Paul Muldoon to doom

others like Paul Muldoon to write
rejection letters sending

them out the New Yorker windows

There’s pathos here, as we’ve been shown clearly where this fantasy originates. At the same time, though, there’s malice: Chang makes sure we’re fully and uncomfortably aware of Barbie Chang’s desire to “doom // others.” In this way, she refuses to allow the poem to fall into a simplistic good-individual-versus-bad-society narrative. Instead, she expertly shifts the poem into a moment of lyric beauty—one still centered on the fantasy of raining rejection letters down from above:

sometimes in the winter

Rather than attempting to resolve the messy, overlapping flaws of this character and the world in which she lives, Chang instead insists that we acknowledge the possibility of beauty within them. Nothing is resolved—but something important and lyrical is made.

There’s much more packed into Barbie Chang than can be covered in a short review. In addition to the ongoing narrative surrounding the Circle, there are equally complicated dramas playing out between Barbie Chang and her mother (who is dying of lung disease) and father (who is slipping further into dementia), as well as a fraught romance with Mr. Darcy (who at once is and is not the Mr. Darcy). Moreover, two first-person sonnet sequences are juxtaposed against the Barbie Chang narratives, interacting in rich and complex ways. In addition to masterfully interweaving these multiple points of view and narrative threads, the book also shows Chang’s distinctive ear and sense of sonic play at full strength. Barbie Chang is an excellent collection, one that further cements Chang’s status as one of the most interesting, insightful, and electric poets writing today.