Beyond Time and Place: A Review of Where the Light is Violet by Xánath Caraza 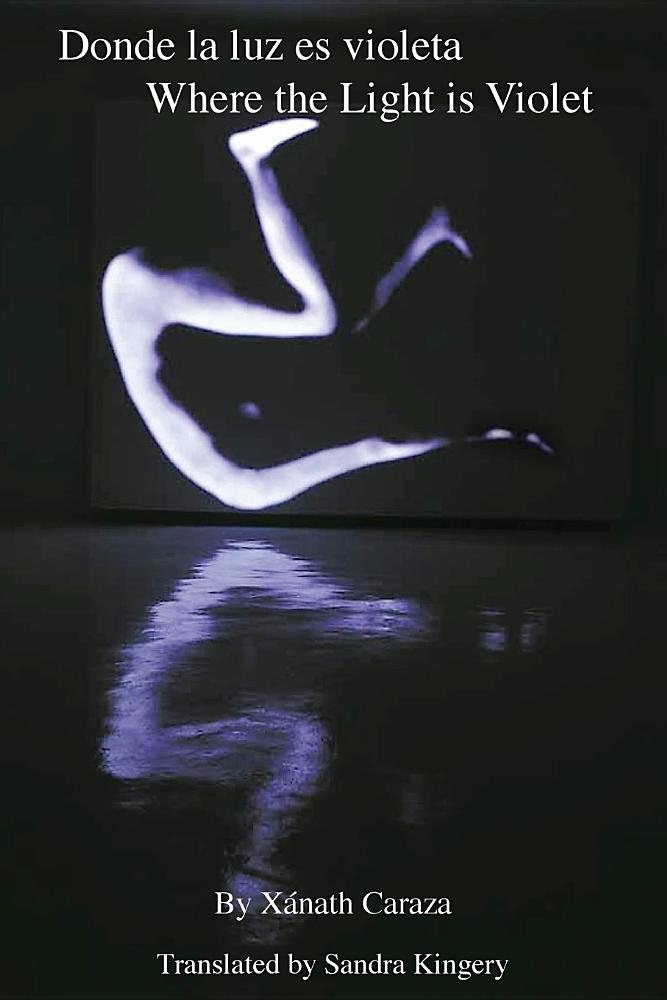 Beyond Time and Place: A Review of Where the Light is Violet by Xánath Caraza
reviewed by Arthur Kayazakian

I was supposed to write this book review a year and a half ago. The reminder sat in the back of my head, haunting me the whole year. Something inside me stirred violently; I was worried that writing a review so late would not be as relevant as when the book first debuted. But when I finally began turning the pages, I could see the poems in Where the Light is Violet by Xánath Caraza remain timeless.

My relationship with being late has always been a struggle, a dark juxtaposition between myself and where I need to be. Especially in today’s social and political climate, I need to be present to distinguish the simultaneous relationships that occur in the constant flux of life. There are many juxtapositions that Caraza profoundly compounds in her collection.

One of the major associations present in her work is the duality of language written originally in Spanish by Caraza then translated to English by Spanish professor Sandra Kingery. The Spanish version juxtaposes the English version, so the poems mirror one another.

In the poem, “Done La Luz Es Violeta” or “Where the Light is Violet,” Caraza writes:

It is as if there are two selves occurring in the same body, in search of one another, guided by the purple light of language. The speaker may navigate physically through Italy, writing poems about Gods, myths, and statues among natural wonders, but an urgency to seek the innermost self guides the poems through this book.

In “Conch,” the speaker asserts, “I am feminine rhythm that runs between / the arteries and veins, golden summer light.” These lines, brushed with grace, effortlessly confess a convergence of the self, as if the speaker has found inner peace against a heavy world filled with doubt and separation. To carry the quality of a pulse “that runs between the arteries and veins” is a gift rewarded by the body when the body is at peace.

I am reminded of Italo Calvino’s Invisible Cities when I read a poem like “Sun in My Gaze.” Not only did Caraza travel to Italy and become a witness to each city’s history and culture, but like Calvino who wrote in the voice of Marco Polo reporting his findings to the Mongolian warlord Kublai Khan, Caraza converses with the reader in exquisite poetic verse about her findings in Salerno: It’s important not to get your feet wet with freezing rain water. You / have to know how to walk in between puddles on Salerno’s stone- / paved streets.” This runs almost parallel to Calvino’s “Trading Cities” when he writes, “Accustomed to traveling along underground veins, they found it easy to enter into the new aquatic realm, to burst from multiple fountains, to find new mirrors, new games, new ways of enjoying the water.” Caraza and Calvino mirror one another through the timelessness of poetry. There is an unspoken relationship between them, a conversation of witness. It is almost as if Caraza responds to the Italian novelist’s “new ways of enjoying water” with her sharp eye that captures sensorial images with vivid conviction: “Two girls shout, it’s a deluge. They struggle with their coins and buy an umbrella, half their bodies exposed in the rain.”

The rain is by no means an accidental image in Caraza’s poems because water is essential to the poet’s journey. In “Island of Fire and Water,” the presence of water and fire surge a dialectic that defines us but cannot be named:

We are of fire and water, of open hearts
of errant souls, of extended arms
we are the others, the ghosts
of liquid voices and fiery gazes

Caraza’s ability to remain open through sensory detail, and not submit to the compulsive neurosis of definition is crucial here. It is so easy to pigeon-hole things we do not understand, but Caraza breaks away from the ordinary language that defines the human experience in the most rudimentary ways. Since our experience harbors complexity, she remains diligent to the image, not by definition but by description, the mixture of elements which fuse even when we “others” remain in the background as the earth happens.

In “Venice,” Caraza uses a poetic device that carries a synesthetic quality to her images: “I think of you, liquid-streeted Venice, aquatic turquoise / of iridescent sounds, of lacustrine aromas.” The “aquatic turquoise” has a liquefied texture with the sound of shimmering light as if twelve tin cylinders hanging from a string chime when the wind blows through them. The street of Venice swirls into a liquid blue that can sing, which personifies the street in a surprising way.

In her collection, Caraza writes an elegy to the Greek and Roman ancestors. Some poetic ancestors include Horace and Virgil. In “Golden Light on the Walls,” she writes in elegiac verse to Virgil:

In the poet’s travel, she finds a prayer to the ancestor. It seems they pulse in the same wound together, which is a journey inward summoned by the deep practice of her poetry.

Somehow Caraza has tapped into a form of pre-language that exists outside of language itself. A formless form of verse that can be provided by the poets before her, so that she can give the poem form, and it is so with this poem here.

In her poem, “Cloudburst,” she writes, “A door bangs in the wind / a window resounds in the darkness / ruthless howling penetrates the soul” which reminds me of soldiers banging against the door of many homes, and the soul inside the body howling for a place to live. It reminds me of the guards in Iran who showed up to our summer house in Khazar Shahr with guns and spears threatening to jail my grandmother for her illegal gambling games.

Now back to time. As I mentioned before, writing this review has been on my mind for a while. I felt like I was racing against the clock. But Caraza’s collection teaches me to perceive a place beyond time and space. In “Dragons and Roosters,” she writes, “I transgress time and the rock.” In her poem, she visits the Byzantine mosaic in Northern Italy, Santa María e San Donato. It seems the poet experiences the beauty of “Polychrome dragons / and proud roosters” which propelled the soul into a state of timelessness, disobeying the influence of time: “history enters me in a moment. / I transgress time and the rock.” I am reminded of my own mortality, the history of my race and culture and the erasure we face against the powers who control the narrative. Perhaps this poem is a call for a home beyond time, beyond history, beyond narrative, and beyond a place we can thrive to imagine, to heal.