“Between Risk and Refuge”: on Stella Vinitchi Radulescu, translated by Luke Hankins 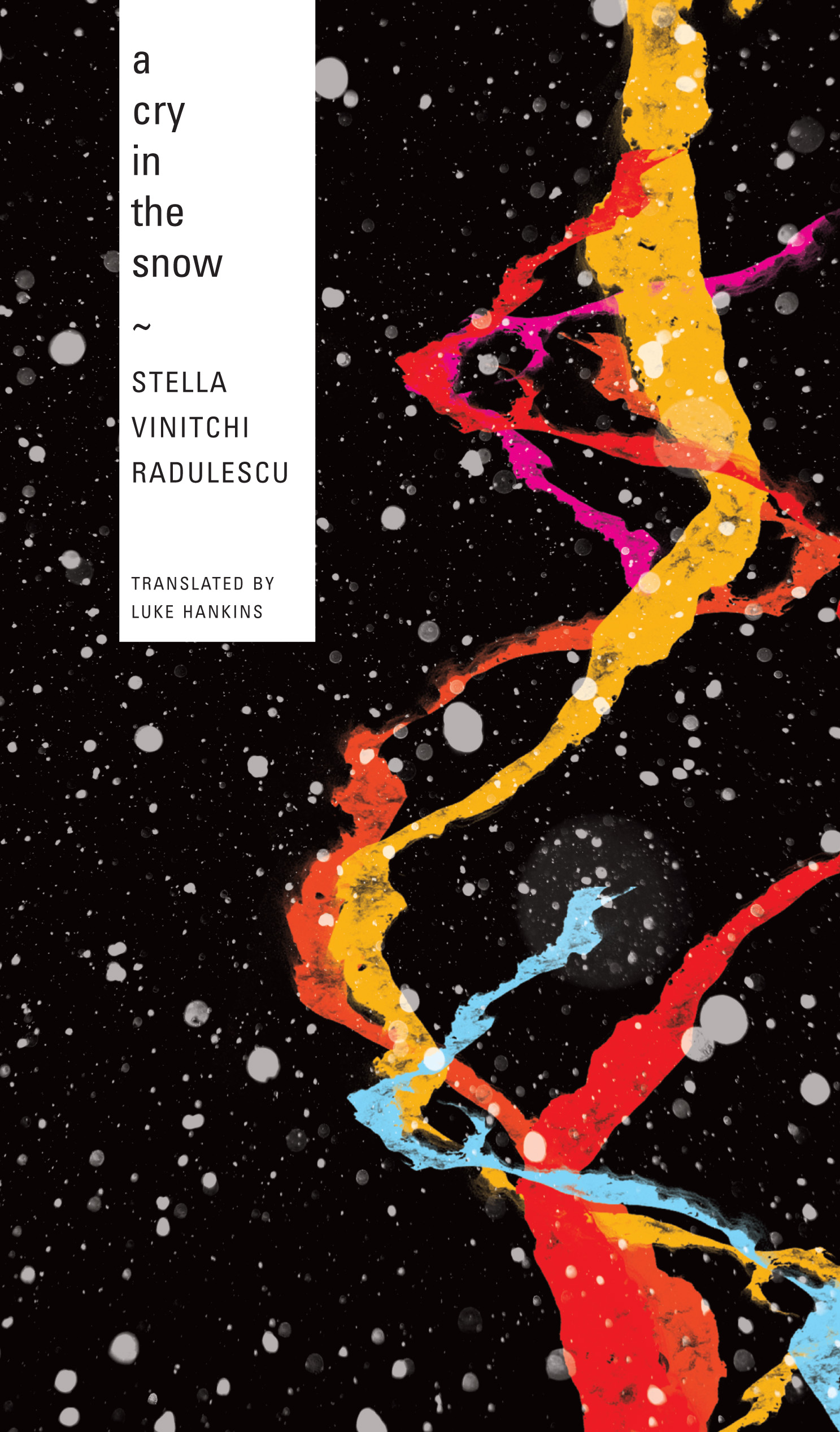 “Between Risk and Refuge”: a review of A Cry in the Snow and other poemsby Stella Vinitchi Radulescu, translated by Luke Hankins

Reading Stella Vinitchi Radulescu’s poems originally written in French translated into English drives home the dual privilege and responsibility that comes with the work of translation. In his translator’s note, Luke Hankins share with us two quotes from Radulescu that touch upon this duality. In terms of privilege, there is the access made possible through translation to such insights as:

“Writing poetry was risky,” Radulescu says, “it could have been seen as a ‘political manifesto’ against the regime!—but it was also a refuge.”

The stakes under which Radulescu writes in all her three languages (French, English, and her native Romanian) is made apparent in these words. This range, from risk to refuge, is a compelling one that points both to a need for the poetic act but also the act of translation. Later in his opening note, Hankins shares:

Radulescu does not translate any of her own poems, and thus has a distinct body of work in each of her three languages. As she puts it: “I feel, think, act, perceive, smell, touch differently according to the language I write in.”

Here, we get the poet’s sensibility: creating in different languages brings with it not only aesthetic choice but also choice in singular expression and nuance. The decision not to translate her own work is one of honoring the work itself. This honoring itself becomes one of the themes in the poems of A Cry in the Snow. Along with honoring the writing act, Radulescu also troubles and interrogates it, all for the sake of further understanding what cannot pinned down or pointed to by language. Yet, in the light of the decision to not translate her own work, one cannot help but wonder: What is it that the translator can bring over from such a singular, idiosyncratic sensibility? Across the three sections of this book—two poetry sequences, and one poetic prose sequence—Hankins does the work of making clear to an English reading audience just what lies in this range between risk and refuge.

The first section (A Cry in the Snow) begins this conversation through poems that use images as physical feats, their acts of evocation creating a theme of the body as poetic space. The poem “body to body,” which is a good example of this theme, begins:

the tree in place of my thirst

I plant it in my eyes

I send its roots

Through this clear set up conflating tree and thirst, Radulescu places the human body and the natural world into conversation. The richness of this conversation is evident in the choice use of the word “plant” as well as the juxtaposition of “roots” and “veins” in their respective lines. These parallels between nature and body suggest an inevitability to the strange and exciting logic of these lines. This inevitability is continued to the end:

stars     I whisper my secrets

I wake with a start

I fade into the shadow of the tree

There is a thrill here in watching the tree/human hybrid logic meet and knock into itself in these words. From “the black” to “stars” and “secrets,” these lines explore the threshold established in the opening lines but do so without answering or claiming anything distinct. Rather, the speaker’s meditation is done for the sake of lyrical momentum, of sharing through words a sense of what it means to articulate these human thoughts.

One is reminded of the Japanese poet Matsuo Bashō and his words: “Learn about the pines from the pine, and about the bamboo from the bamboo.” The simplicity of these words is deceptive; they demand of the poet a dedication to working with words in a way that sidesteps obfuscation. In Radulescu’s work, this dedication is to lyrical clarity. One reads the poem above and feels through sound, line break, and image what is implied by the title. As the poem ends, there is a release into “shadow,” a darkness that lies between the human and natural world. If Bashō would have us learn from the pine, Radulescu would have us learn from the shadows the pine makes. In these shadows, one finds moments fleeting as snow.

These ideas come into play in a different way in the book’s second section (Journal with Closed Eyes). In the opening passage, a diary-like entry is interrupted in a telling manner:

First I stand up, then I find the pack, next…But is there really an order to things? I’ve made and repeated these motions for such a long time, always the same, backwards and forwards, I extend my hand, I find the pack, I light the cigarette, I know it won’t burn to the end.

This sudden questioning amidst the act of lighting a cigarette brings up interrupts an otherwise forgettable moment in daily life. Here, instead of things being fleeting as in the poems of the first section, we encounter a speaker able to dwell and muse. In this meditation in the shadows of daily life, Radulescu subverts daily life and creates a threshold of lyrical insight. Only here, the threshold leads not to thrill but rather to a troubled space of possibility. By pausing in this moment, the speaker is able to do more than go through the motions. The meaning of these motions themselves are challenged, as is implied by the final line in this passage: “You could begin a book this way. Or end one.” The richness of this thought is found in the restlessness evoked in the world of “or.” A dip in either direction could lead one to distinct meaning or feeling that things are meaningless.

The purpose behind such speculation is pointed to in the following passage’s invocation of Anna Akhmatova, the famous Russian poet whose own work lived in a similar range between risk and refuge. Radulescu invokes Akhmatova through the following scene:

And can you describe that? a woman ask Akhmatova in the line in front of the prisons of Leningrad.

This scene from the opening to Akhmatova’s poem “Requiem” is one of distinct conviction. Radulescu invokes it here to establish a similar conviction in her poetic work. Yet, it is the nature of Radulescu’s own sensibility that shows the type of conviction necessary for her contemporary work, a conviction able to speculate and trouble ideas of memory.

This troubled speculation continues into the third and final section (Fragments of Life and Death). Here, Radulescu moves from the fleeting nature of memory to that of presence. In the following excerpt in which a speaker contemplates her inner reactions at a book signing one can get a sense of how presence can be fleeting:

They were gesticulating and holding their hands out to me with books to sign. I said, these are the hours I haven’t lived, the circles that never closed because you cut holes in my eyes.

This reinterpretation of a book as “hours I haven’t lived” is powerful for what it implies about the life of the artist. That a writer’s creative work requires sacrifice is a common trope; what is distinct here, and what makes it a grave yet necessary statement, is how the nature of the work makes this sacrifice a dire one. That Radulescu is working between risk and refuge as well as across three languages makes her work prolific and ambitious; that the body of work that arises from such ambition points to the thresholds of meaning discussed so far marks the endeavor as a sobering one. Again, we have here a poet working to “feel, think, act, perceive, smell, touch differently according to the language” she writes in. This determination makes the reference earlier in this passage to “paragraphs I never finished” all the more meaningful:

I said, this glory…The paragraphs I never finished—you stole their letters from me. Even if you gave them back today, it would be too late; the spaces have been filled.

This understanding of what is lost in day to day life, and of what could be lost, is the mark of a writer driven by urgency as much as imagination. What one discovers delving into Radulescu’s work and Hankins’ deft translations is how necessary this urgency is to contemporary life, and also how inevitable. In the book’s final poem, we return to a meditation on bodies:

final words engulfed by the current,

we don’t finish our sentences,

the trembling white of vowels

and everything one can’t think any more       adrift

there are still mouths

and bodies that want to be touched

and bodies that want to be stars…

This return to the body is made with renewed presence and understanding. The realm of unfinished sentences, what Radulescu terms “sweet absences,” brings us back to the earlier passage about a book signing. Only, instead of apprehension and anger against lost time and lost words, there is a troubled acceptance. Troubled, because the poem’s ending points to something beyond need driving bodies: want. A want of understanding and articulation, of feeling and existence—a want that spans the range between risk and refuge.

José Angel Araguzis a CantoMundo fellow and the author of seven chapbooks as well as the collections Everything We Think We Hear, Small Fires, and Until We Are Level Again. His poems, prose, and reviews have appeared in Crab Creek Review, Prairie Schooner, The Windward Review,and The Bind. A recent finalist for the Oregon Book Award, he runs the poetry blog The Friday Influence and teaches English and creative writing at Linfield College.