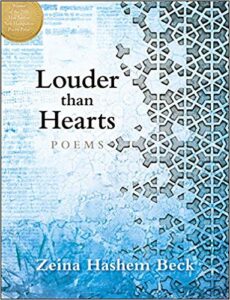 In Il Postino, the 1994 film depicting Chilean poet Pablo Neruda’s exile in Italy and his subsequent friendship with a local postman, Mario Ruoppolo, there is a scene where Mario asks the famous poet about the meaning of the word “metaphor.” In this scene, Neruda explains metaphor as being simply “when you talk of something comparing it to another.” His curiosity not fully satisfied, Mario then begins to question Neruda about his poem “Walking Around,” asking: “Why ‘the smell of barber shops makes me sob?’” After a moment, Neruda answers:

“You see, Mario, I can’t tell you in words different from those I’ve used. When you explain it, poetry becomes banal. Better than any explanation is the experience of feelings that poetry can reveal to a nature open enough to understand it.”

The poems in Zeina Hashem Beck’s Louder than Hearts (Bauhan Publishing, 2017) read in this “better than any explanation” fashion and are guided by a generous poetic sensibility that invites the readers into an “experience of feelings” through both a political purposefulness and personal intimacy.

While this latter duality easily echoes the real-life Neruda’s public spirit and the connection to Il Postino, Hashem Beck engages with his spirit directly in her poem “And Still, The Sun” which interpolates lines from the aforementioned “Walking Around”:

I happen to be tired of being

an Arab. My worst, my best childhood memory is listening

to the news every morning, in my dad’s car. I waited

for the tunnel—the interrupted signal, the mountain silence.

In these opening lines, one is struck right off by Hashem Beck’s take on Neruda’s original line “I happen to be tired of being a man,” how it immediately breaks from Neruda’s melancholy and instead begins a personal interrogation of memory. Yet, while personal, the speaker’s memory isn’t private, rather, there is an acknowledgment of how her life, even as a child, is charged by the presence of public news, which then leads to a desire for silence. This braiding of the personal and public continues as the poem takes on a previously quoted line:

The smell of barbershops makes me wail.

I skip the headlines about the CIA tortures, the elections, the war—

the newspaper words crawl up my arms like black ants. I read about

These lines further delve into the speaker’s inner struggle to balance the personal and public. Even though she decides to “skip the headlines,” the speaker cannot do so without marking the presence. This reluctant looking/not-looking creates a tension that sets up the following line’s imagery of words crawling like ants to the speaker. This juxtaposition of politics and surreal imagery evoke a visceral response and place the reader alongside the speaker as she experiences the effects of compartmentalization. Yet, what marks Hashem Beck’s poetic sensibility is the ability to move from this surrealistic shock into further linguistic richness, as is evident in the final excerpted line referring to astrology and its predictions that “might help me speak” and “orbit love my way.” Beyond sensory overload and mental exhaustion, the poem gestures towards hope and the need to look for hope.

In the same way that newspaper holds facts and signs for the public and private worlds of its readers, the poems of Louder than Hearts are constructed of real things. Unlike a newspaper, however, the examination of language for its breaks and what it can communicate is the goal of the book. One can see this lyric scrutiny at work in “Message From My Aunt On Her Son’s Death Anniversary,” a poem about the speaker’s relationship with her aunt who has lost a child to violence and sends her “voice messages and emoticons, / prayers”:

Today, the emoticon is an orange.

her eyes and aging fingers failing her.

But perhaps she means the fruit, remembers

how she used to sing me that song

where I was the orange she wanted

to peel and eat and not share with anyone

In these stanzas, there is a break from the facts of the aunt’s narrative, a break caused by the symbol of an orange emoticon. Not knowing what to do with it, the speaker begins to interrogate the possible meanings, one line of thought taking her to consider her aunt’s bodily ailments, while another takes her into memory and music. This split in thinking is fascinating, made up as it is of making sense of the signified orange as much as the memory that arises. By the end, the pull of the personal takes hold:

when she opens her arms and walks toward me,

I was telling myself you must have arrived.
The whole town smells of oranges when you are here.

What is powerful about this ending is that it leaves the reader at a moment of personal presence summoned by the impersonal emoticon of an orange, all framed within the speculative engine of “perhaps.” Far from being indulgent, this move is revelatory and returns us to the quote from Il Postino in the way the ending is alive in “the experience of feelings that poetry can reveal to a nature open enough to understand it”—only in this case it is the speaker who is open and whose presence on the page evokes a similar openness in the reader.

One of the lessons of Louder than Hearts is that navigating this terrain of the personal and the political, the public and the private, results in a certain lyric canniness. One must speak about what happens, but also speak about what is felt while it happens; and yet, there should be an opening, a handhold for the reader to come along and see, not the same world she does, but the same feeling of it. The way “My Non-Arabic Lover And I Take the Train,” for example, constructs from its title a narrative of a homecoming and infuses it with the felt human awkwardness:

You followed, silent, watched the map of me unfold,

grow rivers and strange names and temples. This way,
I showed you, my arm like a small bridge, this

how it was made of chickpeas, bread, yogurt, tahini.

You asked me about the armed men in the street,

and I told you there was melted ghee on top of it,

there were roasted pine nuts. I could already taste it.

Here, there is an attempt to communicate the self despite threat. In lines that read as casual/not-casual as the circumstance of showing a lover around a place familiar to you and its requisite explanations, there is an acknowledgment of the complex things that are not easy to explain. In the noting of “the armed men in the street” and the quick move back to the topic of food there is a looking/not-looking move similar to the one discussed in “And Still, The Sun,” only here, the looking/not-looking has the added charge of an intimate audience. There is a nuance to these lines that is powerful: there is no air of avoidance or reluctance; instead, the streaming of this fraught detail into the celebratory language of describing “the best fatteh in town” weaves all the details together in a way that mirrors the speaker’s reality. The final words of “I could already taste it,” too, carry an urgency to them in this context, both sensual and mortal.

In her ability to write poems that evoke the troubled terrain of sense-making on an intimate level, Hashem Beck updates the real-life Neruda’s role of the political poet. Louder than Hearts presents and engages the public and personal in a way that goes beyond declaration and moves into felt presence. Here, we have images on par with prayers, lyrics consistent as heartbeats. The speaker of “Piano” sums up the purpose and power of the collection when she says:

Yesterday, I saw a fish flailing

in the mouth of a seagull.

For a moment it seemed the bird

was choking, the fish diving upward

for air. By this I mean

do you see us dance?

José Angel Araguz is a CantoMundo fellow and the author of seven chapbooks as well as the collections Everything We Think We Hear, Small Fires, and Until We Are Level Again. His poems, prose, and reviews have appeared in Crab Creek Review, Prairie Schooner, The Windward Review, and The Bind. He serves as an editor for the journal Right Hand Pointing and is on the editing staff of Airlie Press. He runs the poetry blog The Friday Influence and teaches English and creative writing at Linfield College in McMinnville, Oregon.