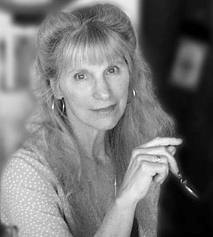 Readers were introduced to Margo Berdeshevsky’s rich use of language with her collection of poetry, But a Passage in Wilderness, in 2007.  Her recent foray into fiction with the publication of Beautiful Soon Enough demonstrates that she has not abandoned poetry. In this winner of FC2’s American Book Review /Ronald Sukenick Innovative Fiction Prize, published by The University of Alabama Press, we continue to encounter lyricism, fresh imagery and classical allusions, a language that reflects a poet’s sensibility. Comprised of twenty-three stories, ranging in length from one to eight pages, these are artfully sculpted fictions conveyed with astonishing phrasing, yet transmitted with relative ease. Several stories are little more than evocations, narrative prose poems, yet are complete, wholly realized.  Others offer a larger arc, journeys with layered dimensions and settings, and figural transformations.  Some are more directly mythologically centered, contemporizing classic stories and archetypal figures, while others are indirectly informed by the tone and nature of classical myths and storytelling that emerge from the impulse of logos as a revelatory force and the drive to make meaning of our observations and our lived experiences. Equally poetic are Berdeshevsky’s alluring black and white photographs that act as accompaniments, indeed as an interstices, to the short fictions. Brevity serves these stories well, in part, because of the lushness and lyricism of the language. One wants to linger over a phrase.  Many sentences rest confidently with a single word—selected with precision. This is a writer who understands the power of language. Symbolically useful, windows are present in many of the stories. They open onto the past, offer reflections or mere glimpses on childhoods or lovers. Also intriguing, the perspective from which the storylines are conveyed might be best articulated from a description in the tale, “Con un Beso de Amor,” when the narrator, a photographer, reminds herself: “Use the long aperture on the widest lens, make everything look attenuated, wide. Yes slightly distorted, yes it’s an Alice-through-the-looking-glass kind of place. Everything is always ‘else,’ reversed.”  As a whole, the collection is chiseled into a lyric precision, mirroring the marble statues in many of the photographic images that grace the pages between stories.

Though several stories are set in many places in the world such as Dubrovnik, Havana, Venice Beach, San Francisco, a majority of the fictions take place in France, particularly Paris, where Berdeshevsky lives. Regardless of the setting, however, the interior world where her characters reside echoes a familiarity that transcends place. For most, their lives are shaped by pleasure, passion, hunger, impulse, and above all, desire, as they journey from experience to experience, unrooted and transient.  Like the Lost Generation of the 20th century, Berdeshevsky’s characters, most of them unnamed, search for connections only to find impermanence. Drifting like leaves on water, they dine at restaurants, walk the streets, climb to rooftops, turn into alleyways, return to park benches in search of lost memories or new relationships.  Yet encounters, sexual and otherwise, are momentary and fleeting. Her protagonists are mainly women, often struggling with their outsider status, who represent various stages and ages in their lives. They seem less in search of making meaning of their existence and more urged on by their desires. If there’s a dramatic arc in these works, it’s charted by suggestiveness, submission, lingering, and parting.  Through these narratives, Berdeshevsky seems clearly comfortable with the unknown and unknowable, the mystery that resides ever at the periphery in our lives.  This is evident even in the angle of vision of her stories; whether from a first or third person point of view, the perspective is often voyeuristic, evoking a tension that is compelling, as Berdeshevsky pairs objectivity and subjectivity, observer and intimate participant. This tension is reinforced by her masterful treatment of time and space as she braids narratives that intersect the present with the past, with situational elements and memories that haunt characters like ghosts. 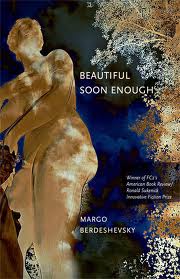 As if calmly anticipating the impending arrival of beauty, the titular story, “Beautiful Soon Enough,” opens with surreal and painterly imagery, the invitation of a “pale soft smoldering” fog covering nearly everything, with only a staircase visible, leading into a chapel, like a calling. The “circle of carved wooden saints” awaits the protagonist, an “odd little woman,” a non-Catholic outsider to this monastic community. Berdeshevsky offers here (and in other tales) a commentary on the intertwined existence of waiting and mortality. With a desire to belong, after years of waiting “to be chosen by fate” and “for good things to happen to her,” she makes a decision: “to spend the rest of her days overlooking this landscape,” among Catholic nuns and priests and penitents.  She enters again into a state of waiting; through severity and her devotion to rituals, prayers, spiritual routine, she waits “to be touched” by “the carved statue” and by the brother who preached each sermon, whose words she would transcribe from memory into “a parchment-papered book” and translate into English.  “She saw his heart.  Skinned as an apple.” In this place, her chosen community, she remains both an outsider and a persistent presence. Then one day her absence opens a void in the life of the brother priest whom she’d grown to love and whose only occasional acknowledgement to her was a nod. “But a small thing is a thing.” The themes we find in this nuanced, deftly delivered narrative are shared in common with other stories in the collection: waiting and desire and love withheld.

Though the content, text and subtext vary greatly, the throughline of eros is rooted in each story.  As a collection, this grouping offers a rich prism of love and desire, each tale forming another facet.  “Heart Open as a Jaw” focuses on two characters: he sings praises to Jesus, Allah, and the galaxies, proclaiming the healing power of love; she is “a student of desire,” drawn to him after he has followed her all over San Francisco “because she needs saving.”  His refrain to her is “everything attracts itself,” yet his resistance of her acts like a magnet to shape her desire of him. In “For Flame and Irresistible,” the first-person narrator who’s looking for lessons on “how to be a wild woman” along with Tandy, who’s a “tempting kind” of woman, pass the waiting when “no one’s buying” in Tandy’s kitchen.  In a language that crackles and strikes sparks, they swap tales—the narrator recalls at twelve humping a boy on a bus; Tandy remembers JFK and Sammy Davis, “her red hair in their fingers.” They wait for Tandy’s son whom “she’s taught to please women.” In the story “Bench” the pursuit of love by a cape-shouldered man in his mid-seventies who “loved Botticelli and Reubens, and round-assed women,” follows his return to the Bois de Boulogne chasing down the ghost memory of his own personal Ophelia, a recollection triggered by the bench in the park where “he had proposed holy rituals for their loving.”

Several stories take the form of contemporary myths. In the shattering narrative “Donkeys,” conjoined twins (though they are referred to, as if in the language of myths, by the misapplied reference, Siamese twins), impossible male and female siblings, Sam and Annie, share one heart, a heart that’s “a ticking bomb.” As in many stories, personal identities are sought and defined; in this tale, Amelia Flower, Sam and Annie’s mother, has declared them “freaks,” after she “held up the ugly birth in her arms.”  Here, the author charts the convergence of the metaphorical and the literal, exploring how “the heart was a history,” enduring “years of words and words about loveandheart and heartandlove and prison at its core.” In another spare, tightly wrought piece, the allegorical and literal are twinned in “Cage.”  Told through a child’s limited yet revelatory language, a lonely girl lives with her unhappy parents in an emotional cage in their New York home. In a pet store around the corner, she finds a kinship with a caged monkey, her “silken savior” with “turned-earth eyes.” This story traces a personal history caged in silence wherein a monkey in a gold cage is left behind, unlike the ghost memory of molestation that haunts the child into womanhood. A more direct mythological reference is found in “Imprint,” informed by Pele, Goddess of Fire. A visitor comes “to an island to become honest,” and in time, grows into a mythical being herself, of renewal and fertility.  Though barely a page, one of the most profound and exquisite stories, “White Wings They Never Grow Weary,” captures the consciousness of a tsunami victim who survives “the decapitating and bruise-purple sea that hurt them all.” She encounters a never-before-seen stranger, a white woman who surely “belonged to the ocean,” “a servant of the fish.” The story mythologizes a recent historical tragedy, making it timeless and universal.

One of the most impressive achievements in this collection is the mastery of a specific consciousness to tell each of the tales.  Peopled with outsiders, exiles, wild cards, these voices arrive framed by desire, often in a state of in-betweenness, like the photographer in “Con un Beso de Amor” who is afraid she “won’t go home. And then afraid that she will.” Berdeshevsky also enriches her narratives by intersecting history with the present lived moment, thereby creating a multidimensional and layered structure.  Though war is in the background in “Le Serveur,” in the foreground two women, Louise and Francesca, have emerged from a war film to be reminded of their own roles in a history larger than themselves. The story poses a question imbedded with the knowledge of complicity: “How will we ever not all be murderers?”  Breaking in on their anguish over the world always at war, Louise, “past her prime” with “determined cleavage,” becomes aroused and momentarily pursued by the maybe-twenty-five year old waiter who follows her into the ladies room and kisses her.  Likewise, history and place, past and present converge in “Pas de Deux, A Trois,” where we meet first-person narrator, Moira at fifty, who is addicted to hope, while asking “how close is death, how near is God.” Moira’s desire to stay young is ironically coupled with the geography of grief, the Pont de l’Alma, where Princess Diana lost her young life to that “crashed tunnel.”

As a collection, this book is utterly satisfying on many levels, even though many characters find little satisfaction in their own lives. Berdeshevsky intertwines form and content in the same way the bodies of strangers come together, impulsively and hungry, who then part, with even deeper desires.

Caitlin Victoria Featherstone teaches creative writing and literature at San Diego State University from where she obtained her MFA degree. As Director of the Living Writers Series at SDSU for ten years, she organized events that brought notable as well as emerging authors and poets to campus.  Her fiction and poetry have been published in journals and anthologies, including Tidepools, Earth Song, Sky Spirit (Winner of the PEN Josephine Miles Literary Award) and Angels of Power (Winner of Britain’s Feminist Fortnight Award).  Born in the great state of Kansas, she has lived California for most of her life.

Margo Berdeshevky’s most recent Letter from Paris in Poetry International:

http://pionline.wordpress.com/2012/05/08/letter-from-paris/
You can find more about Margo Berdeshevsky’s novel through these other links: