Robert Mezey is an American poet and translator. Mezey attended Kenyon College at the same time as E. L. Doctorow and James Wright.  After army service, he completed his BA at University of Iowa.  Following some graduate study at Stanford, he became an academic, teaching at Case Western Reserve, Franklin and Marshall, Fresno State University, the University of Utah, and from 1976-1999 at Pomona College in Claremont, CA, where he was professor of English and poet-in-residence.  Robert Mezey, along with Pomona College colleague Richard Barnes, translated the collected poetry of Borges.  In addition, he has published collections of his own poetry including The Lovemaker (1960), which received the Lamont Poetry Prize in 1961, White Blossoms (1965), The Door Standing Open: Selected Poems (1970), Small Song (1979), Evening Wind (1987), and Natural Selection (1995).

Robert Mezey’s poetry has been recognized with numerous awards including the 2001 Poet’s Prize for Collected Poems: 1952-1999.  In addition to writing poetry and translating poetry, Mezey has also edited poetry collections, including Thomas Hardy:Selected Poems. 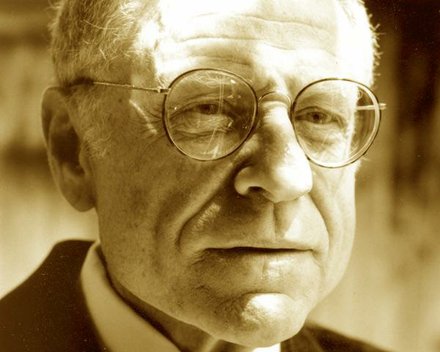 LH: Bob, would you please describe your process in writing poetry?
RM: I’m so deeply involved in the process that I can’t see it very clearly from outside. For one thing, what gives me the most intense pleasure in writing poems is that I’m not really there, I escape from myself.  Even if the poem is about some intimate detail from my own life, I am so wrapped up (or perhaps I should say rapt up) in the mysteries of making and in the endless flow of perceptions and questions and difficulties that I am not aware of myself at all.

The poem may begin with a line or a phrase, sometimes even a single word, or even the sense of a certain cadence, or Frost’s lump in the throat, and if I’m in luck, then I’m off on the chase. But the poem has a life of its own and often seems to be leading me to aspects and notions of which I was not at all aware. I rarely begin with an idea of what the poem is about, or what sort of structure it might have, or if I do begin with that, the poem may well blow it away and go off on its own journey.

The finished poem is often a long way from what I thought I had in mind. And the finishing may take a long time—the first part of the process may be a long session of finding my way into the heart of the poem and coming up with a draft, but then I will usually go back ten or twenty or a hundred times, changing a word here, a line there.

Once in a great while, I’ll get lucky: my sonnet, “Hardy”, for example, I wrote in about 20 minutes while sitting in an airplane —it was as if the poem wrote itself; but to be exact, what I got in those 20 minutes was the first 12 lines; the last two lines of that sonnet took about four months to finish to my satisfaction.  And I should add that what I’ve been describing, although true of most poems I write, is completely uncharacteristic of poems I write by command, so to speak—like those I wrote to celebrate the retirements of certain colleagues at Pomona, or to make a birthday present for my ex-wife (I’ve written four birthday poems for her). With such poems, the muse is nowhere to be found; she says, you’re on your own, and then she’s gone. I don’t quite believe it’s possible to write a good poem without her help, and yet I must say that some of those “forced” poems turned out very well.

LH: What kinds of ideas or feelings attract you to the translation of others’ poetry?
RM: I began translating when I was 12 years old, in Latin class in high school. That first term was easy, englishing small amounts of prose while we were learning the language, but not long after, we were made to translate 20 or 30 lines of Virgil each night, and unlike my classmates, I thought it was wrong to translate poetry into prose and so I did all my translations in verse. It was a good idea, because I learned an immense amount about writing metrical verse from those assignments—I learned my craft. Before long, I began translating on my own, other poets that we read, like Catullus and Martial. When I had learned enough French and Spanish to read poems in those languages, I began to try my hand. For the most part, it was when I came across a translation of a French or Spanish poem and felt that it wasn’t very good that I decided to do it right. (I guess I had some talent for it—a friend of mine sent a little sheaf of my Catullus versions, about 6 or 8 poems, to Robert Lowell, and Lowell told him that they were the best he’d ever seen and probably ever would see.)  I even did some translations from languages that I didn’t know, working with a native speaker (sometimes even with the poet himself). I don’t quite approve of that way of working, yet it sometimes produces very good translations, and collaborating with such expert helpers, I did translations of a fair number of poems from Hebrew and a few from Hungarian and German. The process was for the most part catch-as-catch-can, going to work on a few poems that particularly interested me.

The translation of Borges’ complete poetry with Dick Barnes was far and away the best and most important work that I’ve ever done, and yet that started quite by accident. A former student of Dick’s who was editing a literary magazine in England had had dinner with Borges, who with typical generosity gave him permission to publish English versions of any of his poems, and that young man asked us to do a few. I had never read Borges’ poetry before, and Dick only a little, but after we’d done a few poems, we both realized that these were extraordinary poems and soon came to understand that we were dealing with one of the very greatest poets of the century, and over the years those six or seven poems we’d begun with grew into a collection of some five hundred.  Almost every day for a good many years, I spent several hours a day and often several a night working on them, the happiest work I’d ever done. I would claim that our versions are mostly very accurate, thanks mostly to Dick, whose Spanish was a good deal deeper and more experienced than mine, and thanks to three or four people, friends of ours and friends of Borges’, who read every word of our versions; and everyone who has read our book has agreed that they are very faithful, even with all the liberties necessitated by our translating into rhyme and meter. But I have come to believe that, given lots of hard work and luck, verse translation can come to seem faithful and yet not be really all that close to the original. Frost was partly right, that poetry is what gets lost in translation, but he might have added, as he well knew, that one does sometimes find real poetry in translation—almost of all of it invented by the translator, a kind of substitute for the original poetry. As I have said on more than one occasion, translation has come to seem to me, over the years, just one more way of writing poems.

LH: Do you conjure up themes that much of your poetry relates to, or do you leave that to your critics and commentators?
RM: No, I never conjure up themes or even think in terms of themes—they usually strike me as mere labels or banalities. Most good poems are too rich and nuanced to be described by a theme. When I first embark on a poem, themes are the furthest thing from my mind; I usually don’t know what the poem is really about until it tells me, and that can take a while. And after they’re done, I don’t think of them thematically. More as kinds of poems—elegies, comic satires, love poems, etc. The only time theme comes into play, and then only very crudely, is when I’m putting a book together and I think of grouping several elegies together, and then some love poems, and so on.

RM:As for having favorite poems, well, I guess I do. I could name five or six that I think especially good. (And probably forty or fifty that I think could use some more work.) I suspect my fondness for this or that poem is considerably influenced by what my friends think of it: so many have said that “Tea Dance at the Nautilus Hotel” is one of my very best that it has become one of my favorites. I never “favor” a poem I’m in the midst of constructing—I’m always too aware of its deficiencies, always thinking how far it falls short of what I was hoping for. It may grow on me later, but while I’m working on it, it’s never a favorite.

Quotations from other authors about Robert Mezey’s work, chosen by Vicki Valencia:

Mezey has labored to master the craft of the English language long and deep. Now the fury and anguish of his person have fused with his always wild imagination to produce that almost impossible thing: a poetry that is fierce just because it is so full of love and kindness … Mezey’s Small Song contains only twenty poems. Only? In our era of poetic inflation, twenty poems, real poems, are precious. Taken with the poems in Mezey’s Couplets, they form a substantial value. They are among the most moving achievements of the past decade.
—James Wright

In whatever formal more he has worked, from free verse to the most limited schematic patterns, Mezey has always revealed a mastery of the relation between deep and surface rhythms of language and thought, and an unyielding poetic integrity that is itself like a beacon against a darkening literary horizon.—John Hollander

What I look for—hope for— in poems, and what I find in Robert Mezey’s new work is the effort to bring into words that ultimate tenderness toward existence which is the dream of great poems.—Galway Kinnell

Robert Mezey has long been one of my favorite poets. Some of these new poems are absolute classics of calm and beauty.—Donald Justice