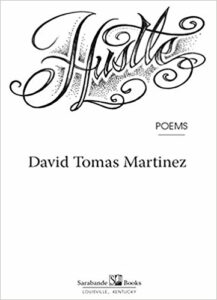 In both of your poetry collections you have written movingly, and bravely, about America today. How do you feel this new book reflects your style and voice? How is it different, for you, from your debut?

Hustle, from a narrative perspective, looks over the shoulder with more frequency than Post Traumatic Hood Disorder. In Hustle, the speaker fixes firmly on the past. However, I feared without a canonical context or academic-decoder ring that an audience wouldn’t understand where my speaker had come from and why. Particularly for Hustle, creating a contained socio-historic context was important to me because the speaker is me, and up to that point I hadn’t read a book where I could imagine myself in. I had not read a book where I could say, “That’s my life!” That is me riding down the Mississippi on a raft, entering Mordor on foot, or like Jane, getting married. These are not the only journeys of a hero. Much later, I would feel the literary equivalent of nostalgia in Junot Diaz’s Drown, but even then, I didn’t want to write like Diaz, with such military-march control, or with such elegant sparseness; I blame Whitman and Lorca. This type of Spartan style that comes from Diaz’s hands are beautiful, simultaneously placing the speaker, psychologically, in present and past, and resulting in sparseness where the large swaths of “meaning” are implied. Diaz’s voice, for me, is one of our best examples of this since the well-groomed intelligence of Hemingway. Shout out JD.

Hustle begins with the long sequence “Calaveras,” a poem that was much, much longer in its earlier conceptions. It introduces what I assume is a foreign terra to most readers. “Calaveras’ employs clarity as an intentional philosophical statement, introducing readers to sections of society they would not typically encounter, particularly urban-gang life. The subject limited the container. Though, like writing in form, limitations can lead to interesting techniques, as in nature, adaptations develop. I had weaknesses I needed to hide, and those limitations I discovered could be chiefly ameliorated via clarity. So, boom, Hustle.

PTHD is more about my “present,” grounded in how I overtly perceive the world currently. I felt as though I needed to express my present in a more complex iteration of poetry. So I went to work on fixing this divot, which began syntactically. Also, the gang narrative is gone from PTHD, replaced by my current life. No comment on the overlap of gang life and academic life. What I hope readers will notice initially in Post Traumatic Hood Disorder are the improvements I’ve made in my game over the offseason, the deeper trust I place in readers. But being a better writer doesn’t necessarily equate to a “better” book, and I hope PTHD can, and will reach as varied an audience as Hustle did.

What authors influenced you during the writing of this manuscript? What authors do you read now and who have been your influences?

In both of your books, music is a very important element of craft. Tone, also. How do these specific elements of craft figure during your writing process? Could you speak a bit more generally about your writing process as well? Has it changed over the years?

I write with my ear first. My poems usually begin, before I write a word, with an idea, topic, or personal experience that I want to convey, then a line comes, or a rhythm, that hopefully can carry through the whole poem. I used to only write to Miles Davis’ Kind of Blue on a loop. I’ve been writing to hip-hop only for a few years now. I write in a coffee shops because I’m too distracted at home, so the music, while bumping, mutes the clinks and clanks of ambience. Idea comes first then music, but always part of the polished product is the sound. I will not let poems leave the house discordant.

As far as tone, I’m not sure I can exactly encapsulate my intentions, though I do recognize myself as serious. While I’m optimistically cynical in the world, on the page, my whole objective is to write all my negativity and fears down. It’s also important for me to realize whatever has happened to me, however wronged I’ve felt, conveying the primacy of my own pain is not the “thesis” of my poems. When I elevate my experience beyond or above other’s, it’s not only uninteresting, it lacks a layer of truth, and honesty then. This can be a difficult task, but I’d argue even poems dealing with a personal trauma, in their best forms, still consider the pain of the world. I’m thinking of a poem like Plath’s “Daddy,” which conveys a deep sense of pain with an underneath layer of regret, while simultaneously making an analogy of historical pain, creating a larger context that mitigates sentimentality by ironic tonal use of diction and rhythm, among other devices. Also, Paul Celan’s “Death Fugue” that uses music, surrealism, limited punctuation, and repetition to represent a more public pain in a personal way. Both poems interest me in their scope. I think “Incident” by Countee Cullen also works in this manner.

We all know about Whitman’s particular affinity for anaphora, Dickinson’s relationship with dashes and slant rhymes. We know of Derek Walcott’s love for mixing colloquial and formal and we admire Kay Ryan’s inner rhymes and Terrance Hays’ tireless experimentation. For each of these poets, their poetic devices, their forms, have a direct relationship to their content. I often revise for a more passionate syntax, Yeats once wrote. Form is a mere revelation of content both Levertov and Creeley attested. What about you — what poetic devices are most meaningful for you– that is, what poetic devices carry most weight, most passion, for your writing today?

I’d guess my use of narrative on the high wire of the lyrical, but so many poets have done it better than me. That’s hard. Mostly because I feel as if I shouldn’t know too clearly the answer to what I do well, or maybe I believe I shouldn’t admit it but isolating one aspect of a poem seems impossible. You mentioned earlier my use of tone, which I think plays into my answer of narrative inside the lyrical, but it’s inextricable from diction, where for me, most poems leave much to be desired. And diction is directly patterned by syntax and grammar, creating an even murkier answer. Give me another twenty years of writing to answer that.

Although each of your two books is a collection of individual lyric poems, that work on their own, both books also function as unified collections, each possessing one large, almost choral voice. What advice do you have in putting a manuscript together?

Thank you. I’ve worked hard on defining for myself what constitutes voice, and how a poet can keep that voice interesting. The books I enjoy vary, yet are simultaneously familiar, which can mean looping themes and ideas back while keeping language and form varied. I consider this pattern making. Thus, the pitcher changes but the water doesn’t. When done well, it creates an interesting and cohesive collection. Hustle was written over ten years, but half of it was written in two years. PTHD was written over three years. Both collections I thought of in terms of a `narrative arc. How does my personal experience relate to the reading, in time and space of pages, change or grow as the collection progresses? How can I make connections between poems, like I make connections between lines in a poem? Juxtaposition and patterns affect tone. And the poem prior affects the poem latter; one poem can hide another, as Koch said. So, when constructing a manuscript, panning back, considering how a narrative develops is very helpful. Then creating connections between poems, phrases and ideas that rhyme, keeps tension while the slower aspects develop.

You have been a large presence during your time at SDSU. There are still legends on campus about your walking around with a extra large copy of Oxford English Dictionary and engaging fellow students and also your professors in surprising conversations about poetry. After you have graduated from SDSU you went on to attend University of Houston’s PhD program. There, you edited Gulf Coast magazine, which is a well known literary journal. Since then you have taught at such schools as Columbia and participated broadly in the larger literary community. How did it all begin, how have you formed your community post graduation from MFA? What kept you going?

Is “surprising” a euphemism for “pain in the ass” by chance? I walked around San Diego, anywhere from Southeast to Rancho Santa Fe, with a large dictionary, which was part performance but mostly a physical manifestation of my desire, a promise to dedicate myself to a literary life. Mostly though, my lexicon was lacking, and I wasn’t going to let a lag in diction limit my poems. I refused. Seriously, I used to stop lectures with questions about words I didn’t know. I would ask, “how you spell that poet Rambo?” In PTHD the poem “And Three” talks about this period. I read and learned then with a feverishly-hopeful attitude searching, with limited context and knowledge, needing to repeat sentences and paragraphs to process them. I thought I was so behind, but now I see that I was where I will always be, learning and shouldn’t be expected to know. I was searching in those pages for answers, somewhere or somehow, be damned these folks that don’t believe. I said earlier I
tend to be cynical, and I am, but the one place I’m not cynical, is my belief in the potential of poetry, which is rarely actualized but always latent, ready to react. I am a true believer in poems. And that has always pushed me, to write better poems and also has inspired me in my search for community. I’ve been fortunate that other poets have engaged and shared their time with me. I’m an advocate of mentorship because I’ve only been able to improve my writing, my person, because of the time other poets have shared with me. I try my best to be generous with my time because of this. Reciprocity, is key.