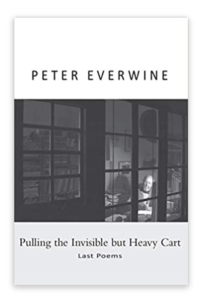 PETER EVERWINE’S  posthumous collection Pulling the Invisible but Heavy Cart: Last Poems illustrates and embodies its title in expected and surprising ways. Expected in that many of the poems elegize figures dear to the poet: his mother, an uncle, his grandfather, friends who were fellow poets, a childhood dog, a wolf. The poems’ surprises manifest so surreptitiously that at times readers will come to realize they have had an epiphany, but often that flash of deepened awareness reveals itself in hindsight. Such a delayed reaction testifies to these poems’ quiet force.

For those familiar with Everwine’s oeuvre, these observations may be expected, perhaps reasonable. For those coming to Everwine’s poems for the first time, may these observations provide some well-intentioned advice to lower one’s expectations for immediate gratification. The poems’ suspension of impact is one not caused by idiosyncratic indulgences. Everwine’s primary stylistic signature is the illusion of a distinct lack of style; consequently, the poems deserve to be read slowly and patiently. Doing so will grant readers access into Everwine’s singular voice of silence and vision of solitude.

Everwine would probably bristle at the mention of “voice” and “vision”, “silence” and “solitude” when discussing his poems. He does as much in an interview with Christopher Buckley and Jon Veinberg in the book’s supplement (prose selections, comments, and interviews). In a 1983 interview, Buckley and Veinberg ask Everwine “Aren’t you tired of hearing ‘Everwine and his silence, Everwine and his solitude,’ as if the poems were wholly about that—as if the white space on the page were really that important? Isn’t it rather what you say?” To which Everwine responds:

You sit down and you want to write a poem and there are a lot of people who have talked about this, you hear a voice that you think is your own, and if you hear a voice other than that, it’s not your poem; it’s somebody else’s poem which you can admire, but it doesn’t sound like where your poems come from. And I suppose that sense of sitting down and listening to a voice probably comes close to a sense of a kind of meditative voice—that is what I begin to associate with my poems, that sounds to me the most authentic I can get. …I want to stay very close to that impulse that feeds the poem, and that impulse for me comes very close to a sense of silence which surrounds the act of the poem, rather than one that is the center of the poem. (76)

Everwine’s epiphanies are triggered and sustained by impulse. But rather than immediately give voice to those epiphanies, he exercised patience and listened to them; then—and only then—if he could sense his authentic voice coming through, would he write. This fastidiousness accounts not only for the brevity of his poems, but also for his comparably modest output (seven books of poems in sixty years). His process is a slower one, and his voice is a quieter one. Slowness and quietness demand patience, discipline, and faith. Everwine’s last poems evidence all of these, and exemplify what Rilke surmises in his seventh Duino Elegy: “…We want to display it,/ to make it visible, though even the most visible happiness/ can’t reveal itself to us until we transform it, within.”

Pulling the Invisible but Heavy Cart is organized into three sections. The poems in Section I tend to look back to people and places from the speaker’s past. Everwine elegizes his mother, grandfather, uncle, and childhood dog, among others. In Section II, Everwine keeps his gaze fixed on the past, and the subjects remain familiar and local, but the speaker’s tone and voice tend to hit more notes of humor and gratitude. In Section III, Everwine situates many of the poems in present moments as a man who has lived nearly nine decades; consequently, the poems take on a voice and vision more contemplative and somber. Throughout the thirty poems, readers will be guided by Everwine’s modestly sagacious and humbly observant passage of time, which for him can be heard in “a rising chorus of ambiguous songs,/ even as we enter another day of our lives/ in the loneliness of how it is” (“How It Is [Later]).

“Lines Written for Elmo Castelnuovo” (from Section I) is a three-part elegy for the speaker’s uncle who died unexpectedly when he was a child. Each twelve-lined stanza is rendered in an elastic blank verse. His abrupt, tragic death—prefaced by a difficult, painful life—bring the poem’s deepest emotional center to the surface in the third stanza. Stanzas one and two contain precise imagery, controlled prosody, and palpable pathos. But by the end of stanza two, one may wonder why all of this technical facility and authentically rendered feeling has been set in motion. The third stanza provides a glimpse into Everwine’s impulse for writing the poem:

If you returned now from the sooty underworld
in which you dwell, you would not recognize me.
The gate is gone; the house and those who lived in it
are hidden elsewhere. Only the crescent moon
and darkling hills are as you left them. Come back
as you were, if only for a moment. I’m waiting
by the back steps. The kitchen window casts
its light; at the laden table the absent prepare
for your arrival. You will be hungry and tired,
as in those years through which our lives passed.

What is more treasured, more desired than reunion with those we have lost? What makes Everwine’s poem surprising is this reunion’s tenor. In a scene fully formed solely in the imagination, one may expect more light and less darkness, more warmth and less distance. But to imagine the reunion otherwise would be, for Everwine, someone else’s poem, and therefore a lie.

Everwine must remain true to what he most deeply imagines rather than write about merely what he may wish to have been. One, then, may be inclined to describe Everwine’s poetry as ruthless, honest, patient, and attentive. Of course, it helps a great deal if one remains silent and listens carefully and deeply; and certainly, solitude engenders deep listening.

But silence and solitude, and the expectant suggestion of solemnity, do not dominate Everwine’s imagination all of the time. His sense of humor and capacity for levity, at times sheer joy, run through a number of poems in Section II.

In an elegy for his friend of over sixty years, fellow poet Philip Levine, Everwine likens Levine to a fox. The poem, “Nellie,” gets its title from how Levine would sign his letters to Everwine. From there, Everwine muses on possible reasons why Levine would sign those letters with such peculiarity:

In your letters to me you signed yourself “Nellie”,
the name you’d given to a cat you favored.
Touching, I thought; you, such fondness for a cat.
But I think you may have fooled me, friend, and named
the two of you after Nellie Fox, the White Sox
Hall of Famer, although the fox you meant
was a spirit animal—resilient, uncanny,
kindred to the seer and the seen, sly trickster, clown.

Those familiar with Levine’s poems will catch allusions to two of Levine’s poems, “The Fox” and “A Theory on Prosody.” But it is to Everwine’s credit that the poem is not beholden to those allusions to sustain itself; to borrow from the parlance of jazz (music both Everwine and Levine loved), those not hip to the riffs will still be able to keep up. No one apart from Levine’s wife Franny knew Levine better and longer than Everwine, and his elegy for his friend is among the best we have for this major American poet.

Section III contains poems set in present moments of a man who has lived nearly ninety years, and has written and translated poems for nearly sixty of them. In these thirteen poems, Everwine meditates on his mortality; no longer a far-flung prospect, a palpable presence that illuminates many of his poetic impulses and epiphanies. In another elegy for a friend and fellow poet, Jon Veinberg, Everwine assumes an almost disembodied voice providing something that resembles objective reportage, but is an understated lamentation.

Only six couplets long, here is “The Depot” in its entirety:

One by one they set their baggage on the platform
and, relieved of their burden, prepare to depart.

One holds a lucky coin in his hand.
One thinks of a pond he fished as a boy.

One whistles softly through pursed lips.
One keeps a sorrow in her heart.

One leaves behind the words that went unsaid.
One sees a window and runnels of winter rain.

Meanwhile the baggage has been stowed away
or lost in the confusion, because, as usual,

a crowd is milling about on the platform, waving
goodbye to those diminishing into the distance.

The omission of overt grief and presence of Veinberg (apart from the devotion) may compel one to wonder how this could be an elegy. The poem straddles dispatch and allegory, and what results from this unlikely combination is a poem that exists simultaneously in two worlds: the physical and the metaphysical. Yet, the tonal restraint risks silence in order to achieve the deeper, more resonant notes of grief.

These last poems illustrate Everwine’s discreet genius in being able to transform empty silences into replenished silences. Of course, he needs words to carry out this unassuming work; and after all, crafting silence is not unlike sculpting dust.

In “At the Hermitage,” Everwine has surrounded himself with all the necessary influences to help him create some meaningful silences, chiefly among them Po Chu’i. And like Po Chu’i, Everwine is

…[u]nencumbered,
but for the years he carried, he chose the path
of solitude into mountains much like these.

The clear sound of a bell from the mist,
a heron lifting from a pool of water—solace enough
for him and, sometimes, for me as well,

but when I turn away from my book
the old disquiet shakes and frets at my sleeve,
and I can find no peace.

Sit in your cell, St. Benedict said,
and your cell will teach you.
The hours drowse, the dun-colored bird

with his fierce appetite for the present
is hard at work, the gentle Po Chu’i is gone,
and under words, under everything is silence.

The economy of Everwine’s phrasing merely highlights the depth and breadth of his mind, for at heart Everwine’s sensibility is an Eastern one: koanlike, meditative, patient, sagacious, humble.

In a second, more recent interview with Buckley and Veinberg (this one from 2016), Everwine addresses directly what his cell has taught him:

What the cell teaches me isn’t the peace found in solitude, isn’t the detachment one requires. What I find is what lies beneath the Word: silence. I bring it to my life, my memories, my history, and I don’t wish to give them up, or can’t get give them up without becoming something other than who I am. (100)

Reading a poet as apolitical as Everwine may seem an odd choice given our current moment of upheaval, illness, and isolation. Everwine’s poems, in the end, are not escapes from the chaos and tumult of our lives. They carry joy and the loss of that joy in complementary notes of poise and longing. They confront and counter the inevitable, inescapable tumult with grace and composure. They can, and should, be turned to as examples of how to live meaningfully in a time on the cusp of being crushed by meaningless loss and pain.