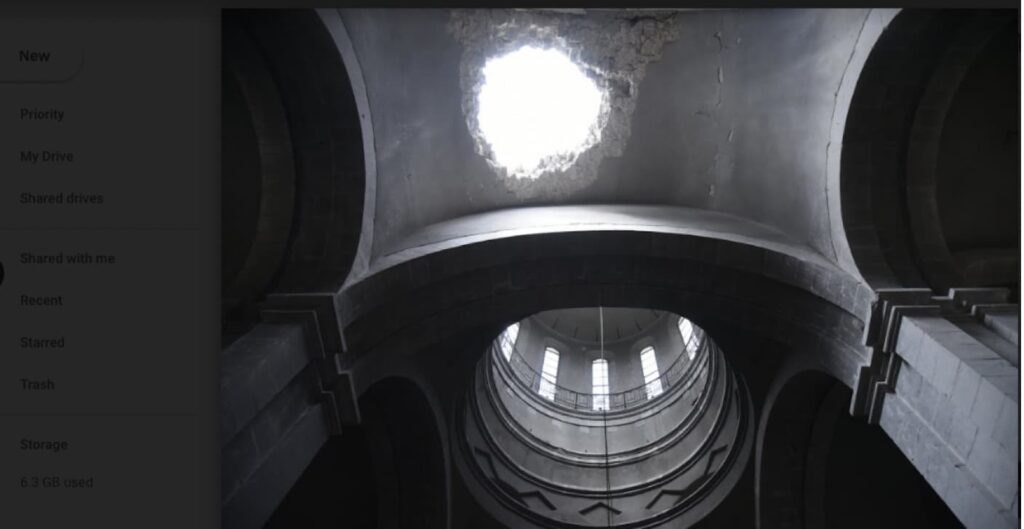 SOMETIMES it’s an image that writes the poem. I see the photo of a hole in the bombed ceiling of the Ghazanchetsots Cathedral in Shushi, a puncturing wound in the psyche, and immediately become a bird who flies in and out of that hole studying the way the light still, miraculously, shines through. Sometimes it’s a patch of audio from half a world away — the family gets outside the bunker for fifteen minutes a day, they say. Sometimes it’s the idea of a ghastly thing—glowing like a toy found in the woods—in a child’s hand. The new eruption of war and violence and death and destruction in Artsakh has shaken those of us who are far because of its ripples, but this shaking can only be a feint version of the shock felt by those who are living in the heart of it, those who are inextricably part of it. The poem is born in this witnessing and is an attempt at understanding what is, unfathomably again, inexplicable.

I read this poem as part of Don’t Look Away: A Literary Series for Artsakh, hosted by the newly-founded International Armenian Literary Alliance (IALA) to raise awareness and funds for those under attack in Nagorno Karabakh, the black garden. You can view the first reading here, hosted by Olivia Katrandjian and featuring Peter Balakian, Carolyn Forché, Nancy Kricorian, Anna Astvatsaturian Turcotte, and Lory Bedikian, and the second here, hosted by Arthur Kayzakian and featuring Lola Koundakjian, Mashinka Firunts Hakopian, Armen Davoudian, Nairi Hakhverdi, Alene Terzian-Zeitounian and myself. Learn more about the conflict and how to support those affected on IALA’s website.

The Hole in the Church of My Heart

There is a hole in the church of my heart,
a fire in the palm of the young boy’s mind.

There is loss at the monument of topple
unannounced at midday unsteadiness.

There are fifteen minutes to see the birds
when my breath and its rooms escape me.

incantations, the letters of former words
scattering away from clusters of pages,

munitions. There is a swallowing of whole
tongues, a burying of more than just heads.

In the afternoon, these voices seek shade
to complete their inconceivable sentences.

In the evening, there is a snake in the black
garden. The children begin to chase its tail

again because there is no other play. I see
the moon through the whole of the night,

and I know, at least, that in thickening
smoke and holy gaze, I am not alone.