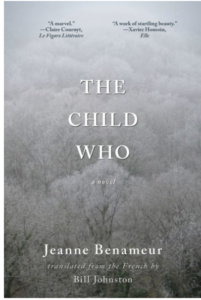 The Child Who
by Jeanne Benameur, translated from the French by Bill Johnston
Calypso Editions 2020 $15.00

THE CHILD WHO is, and reads like, a novel; however, at its heart, it’s a 101-page epic poem, perhaps a baby sister of Homer’s The Odyssey.

Jeanne Benameur’s story follows three unnamed characters through their grief: A child, whose mother has disappeared, who has likely left her family, but perhaps, has died; the boy’s father, who longs for his wife, who is angry at her for leaving and at himself for daring to love her; and the father’s mother, who is used to getting through impossible times, but who fears for her son and grandson.

Benameur keeps her trio of characters unnamed, which allows the reader to place herself inside their heads. In one moment, the reader, too, is a boy with an imaginary pet dog, a boy who finds solace and answers in the woods, whose chest is “as broad as that of any adventurer who walks all the way to the innermost depths of his heart.” In another, the reader finds himself inebriated at the local Café, propelled there by a grief in his belly. “It’s as if sleep has not properly left him. He tries to chase away the strangeness of this sensation: a still-sleeping body inside his own body.” And yet again, the reader walks inside the child’s grandmother, who shows her devotion by completing her day of tasks in the village. “In her head is the list of what she needs. It’s the only way to take care of a family.”

This grandmother is the only one who knows: She, her son, and her grandson experience the same thing, no matter how that grief manifests. “She says to herself that at the same moment all three of you have the same taste in your mouths. At bottom, that’s what family is.”

Benameur’s narrator, like our protagonists’ names, is a mystery. At one point, the narrator feels like God, holding the child’s hand, watching him process and decide upon the kind of life he’ll lead, presenting the imaginary dog who is exceedingly real to the boy. At another, the narrator is the ghost of the mother, watching the family she left process her abandonment. And at yet a third point, the narrator is Benameur herself, omnipotent but loving, silently nudging her characters toward their inevitable realizations.

The poetry in The Child Who is a delicious mixture of simple vocabulary posing some of life’s biggest questions: What is a mother’s love? A child’s? A lover’s? What is home, or where? Do we have any say at all in what our lives will be? In what touches us? In one scene, a stranger stumbles upon the child, singing, and the stranger is so overcome that he rushes away. Later, he wants to share the experience with his wife …

“But something held back his voice. A sense of shame (…) like we have as children when confronted with the proof of what we will never attain, when we feel that the dreams of the world are much too huge for us to carry them on our heads. That we’ll never manage it. For certain. And that deep inside we know our parents couldn’t carry them either, nor our parents’ parents, and so it goes on this earth.”

Benameur, who writes in French, was awarded the UNICEF Prize for the novel Les Demeurées in 2001 and the Book Award in Poitou-Charentes in 2009, for Laver les Ombres. The Child Who was translated from the French by Bill Johnston, who has won awards including the National Translation Award in Poetry, the Best Translated Book Award, and the PEN Translation Prize.