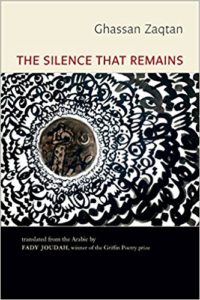 The Silence that Remains by Ghassan Zaqtan (trans. Fady Joudah)

Ghassan Zaqtan’s volume of selected poems, The Silence That Remains, is aptly named. Throughout the collection (translated from the Arabic and with a foreword by Fady Joudah), we see a poet skilled in creating evocative, impressionistic moments, and trusting the reader to hear what remains unsaid. Take, for instance, “Other Things,” which begins:

A lonely evening
and an only window,
the flower vase is on the table,
a flower has wilted
or is almost there
that’s you

From the beginning, the poem’s title signals that we’re being thrown into a world already in progress: these are “Other Things”—“other” than what? As we move into the first stanza, it seems that we’re being more firmly grounded in a particular scene: we’re told the time of day, we’re given a place, we’re given an image, and we’re told how to read the image: the flower is “you”—but this isn’t as clear as it at first appears. The flower is “wilted / or is almost there”—which is it? The central image remains indefinite, two possible images superposed.

As we move into the second stanza, it seems we’re going to get an explanation of the image: of course you’re the wilted-or-almost-wilted flower, haven’t you noticed these reasons that you must be? Instead, what we assume to be an explanation veers into a new set of images altogether. We were inside at a table, now we’re outside with a fence. There’s broken glass—is it the vase from the previous stanza, or something else altogether? And the metaphor of flower-equals-you, which the previous stanza had suggested would be central, is entirely abandoned. As a result, we’re left feeling unmoored at the same time the rhetoric suggests we should understand. The poem continues:

The shift from rhetorical questions to declarative statements implies a clear continuation of the argument’s logic, as if this stanza should explain what’s come before. Instead, we’re thrown into yet another new world: where before we’d seen only the speaker and the “you” sharing a more or less quiet evening together, we’re suddenly aware of danger and the possibility of violence. What does this speaker intend to do with his smuggled gun and bullets? Who visited him on Sunday, and why hasn’t that person returned? Did something happen to them? Who is in danger and from whom? Having raised these questions, Zaqtan closes the poem:

The stanza is a perfect conclusion to this poem. Throughout, Zaqtan has relied on the force of his rhetoric to overpower the questions he raises, to give us the feeling of an answer while in fact creating only more uncertainty. Here that strategy reaches its peak: “calm down,” the speaker insists, “calm down” and stop worrying over such questions. (He even answers one question—the “you” is revealed to be the speaker’s wife—but that fact is given little attention and quickly forgotten in favor of the vivid closing images). This poem, this “song,” isn’t meant to give the answers. It’s meant instead to “release a bird in the heart.” What matters is that the “lonely bird” of the poem might fly out and find “a lonely one” to read it.

Zaqtan’s ability to create such richly complex scenes in only a few lines is particularly impressive, as in “Three Stones.” The entire poem is as follows:

This single image of the fathers in their “full gear” (presumably combat gear, based on the surrounding poems, which feature recurring images of war) contains so much: how war intrudes upon family life, how the sons learn to fear their fathers even though the fathers do not want to be fearsome, how the speaker wants to focus on the stones but is instead inexorably pulled back into thoughts of the fathers. That Zaqtan is able to do so much in a single sentence fragment is a testament to his skill and clarity of vision. We see the same prowess in “The Sleeper’s Hymn”:

and it doesn’t happen
or it ends

Again I am struck by Zaqtan’s ability to balance clarity and mystery—to make clear what must be clear and to leave mysterious what must remain mysterious. Sleep has “exactly seven” steps, and this certainty feels right. It doesn’t matter who the “you” is—only that there is a “you,” and that this “you” is somehow linked to sleep and to death; likewise, it doesn’t matter why sleep “doesn’t happen,” so Zaqtan quickly moves past these questions, driving toward the final, arresting image of the dead learning what sleep is. Zaqtan has already introduced the idea of death with “an elegy of the gone,” and has tied the idea to the “you” (suggesting the speaker may have a personal connection with someone who has died) so this ending feels at once surprising and inevitable, a perfectly haunting and poignant ending to the poem.

The Silence that Remains is a beautiful book, and Joudah’s translations reward each new visit. Zaqtan’s masterful poems are the sort that can’t quite be nailed down: since so much is left unsaid, since so much is left to the reader to fill in. Each time I reread them something new seems to happen. Zaqtan wryly and vividly describes this sensation in his poem “Always,” which I read and reread with pleasure:

J.G. McClure holds an MFA from the University of California – Irvine. His work appears widely, including in Gettysburg Review, Green Mountains Review, and Birmingham Poetry Review, and was selected for inclusion in Best New Poets by US Poet Laureate Tracy K. Smith. His first collection, The Fire Lit & Nearing, is forthcoming (Indolent Books 2018). See more at jgmcclure.com.