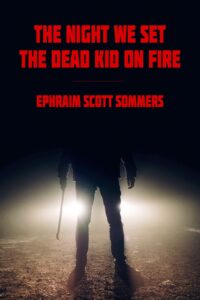 Opening a Throat in the Earth: Ephraim Scott Sommers’ The Night We Set the Dead Kid on Fire

One might expect to find the cover image of Ephraim Scott Sommers’ debut collection, The Night We Set the Dead Kid on Fire, on the cover of a Hollywood thriller, not on the cover of a poetry collection. Sommers’ collection, though, is as deeply rooted in suspenseful narrative as it is in masterful language. The title already promises a narrative of violence and communion—this cast of characters is almost ritualistically broken apart and put back together through alcohol, drugs, sex, and violence. As The Night We Set the Dead Kid on Fire progresses, it becomes clear that violence, drugs, and sex not only bring together the people in Atascadero, California (where so much of this collection takes place) but, as I kept reading, I began to understand that I was also implicated in the violence, but also in these poems’ humor, music, and kindness.

One way that these poems work to implicate everyone involved, the reader and speaker included, is through their obsession with spectacle. I often found myself face to face with these poems’ speakers as someone in an audience watching a singer on stage. Sometimes this is explicit, as in “Hey Singer!” and “The Singer Sets the Town on Fire to Get Himself Seen.” In other poems, the speaker more discreetly frames these stories as spectacle, as in the opening poem “Exhibitionism” when, at the end of the poem, the speaker leaves his bedroom door open for his roommates to see him having a one-night stand. Through his attention to spectacle, Sommers continuously raises the question of exploitation—When do we have the right to tell someone else’s story? Do we have the right to tell a whole town’s story? How can we portray poverty and alcoholism with unflinching honesty, and yet with immense kindness?

Through a thread of elegies in this collection, both communal and personal, these questions come to the foreground. Toward the beginning, the speakers have trouble with how to think or write about the dead. In “Labor Day,” the speaker tries to escape from grief with “a fifth of Jim Beam, two Percocet, and rough sex.” Later, in “God Grant Me a Room for Playing Cards Against My Enemies,” the speaker wrestles with the irony of the poem’s setting—he’s sitting around a poker table where someone was recently shot, and the players are holding a moment of silence before getting on with their poker game. This fierce irony changes though and, in one of my favorite poems “Mass Shooting in Kalamazoo,” the speaker is learning how to be silent—and how to find solace in silence—in the face of inexplicable violence. “Yes, this must be my impossible / human challenge, to fill this newest loneliness / with silence.”

Most of the poems in Sommers’ collection tell great stories, but the collection as a whole also has a strong narrative arc. The later poems are more stable and generous than the earlier poems, the “one-night stands” giving way to a long-term relationship. As the poem “Forgettable City” puts it, there’s the deep sense that “there is so much more / now for me to lose.” It is for that reason I liked the later poems even more than the earlier ones. My favorite poem was probably “Tornado Warning,” in which the speaker grapples with the expectation of his father’s death. Hundreds of miles away in Kalamazoo, Michigan, the speaker can’t be in California with his father who’s on oxygen. The poem is a way to delay death for a little longer—“I don’t want to go there yet. I’ve been rushing my song // toward the big ending my entire life.”

Sommers’ language is rich, often creating a frenetic or playful vibe. He frequently turns nouns into imaginative verbs, and his rhymes are fantastic (“my father sings Dylan / like a mystic hymn, smokes the live mic like a Lucky Strike”). He also works primarily through long, careening sentences and drives these stories forward at a blazing pace. But, as much as his poems gain momentum from narrative, it’s their anxiety over narrative that drew me in most. They look forward to a good story, but his poems want to live in the the moments before it begins or ends. Whether it’s the moment before finishing a beer, or the moment before the party begins, or the moment before a parent or grandparent dies, these poems are a way to live in that moment, to delay tragedy or death or forgetfulness, because, as Ephraim Scott Sommers writes in “Exhibitionism,” “I never want / any moment I have lived to end.”

Amy Sailer’s poetry has appeared or is forthcoming in Quarterly West, Meridian, The Collapsar, and elsewhere. She currently serves as a coordinator of the Poets-in-Print series in Kalamazoo, Michigan.