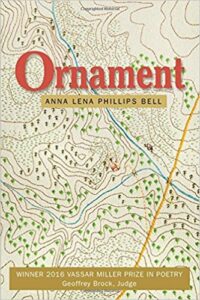 Anna Lena Phillips Bell is a banjo-player. The banjo is not an instrument for romance; leave that to the guitars. It’s not melodious; that’s for the fiddle. Or the mandolin. The banjo is raucous, whether it’s played in Uncle Dave Macon’s clawhammer style or Earl Scruggs’s finger-picking rolls. It gets its resonance from what is essentially a drum head. It can be home-made with a tanned hide and a hoop. It is the instrument of slaves and “hillbillies,” of minstrel shows and clowns, of Roni Stoneman on Hee Haw and Steve Martin on Saturday Night Live. It’s a folk instrument that has been adapted by sophisticates such as Bela Fleck. So how does the banjo influence Bell’s work? In her debut collection, Ornament, winner of the 2017 Vassar Miller Prize, Bell explores the interface between poetry and traditional music.

Consider the title poem, “Ornament.” In music, an ornament is a grace note, some trill or
improvised sequence added for joy in the instrument’s ability to enhance the melody. The banjo lends
itself to such ornamentation and the rhymes and refrains of this poem twist and twine as intricately as a Scruggs breakdown. Its lines repeat within and between four triolet-like stanzas, circling like a sonnet crown, so that in its ending is its beginning. It begins among the domestic, bobbins, pins, and prophylactic thimbles, “baubled, bezelled” sometime instruments of decoration. It ends in the forest, in a bed on the ground, a pallet of leaves and moss. It moves from the question “Is mine a gaudy God?” to the imperative “Be mine, a gaudy God.”

“Gaudy,” an adjective that has come to mean cheap or tawdry, has origins in the Latin “gaudium”
meaning joy or delight. The poem looks for either a gimcrack or a joyful God or perhaps both in one; it
finds Him, not in the domestic indoor world but outside in a “meadow bed.” Is this a turn on “Gypsy
Davy” with a little bit of John Donne thrown in for bass notes? “Make down a meadow bed; make me
your own.”

“Trillium” prepares the way for this ornamented forest God. In it, the speaker and her brother
venture at dusk into “the bottom, where the deer / lie down in grass and leave their bodies’ echoes / on the ground.” “Trillium” is a poem in triplets as the trillium is a wildflower that grows in triplets, three leaf-like bracts, three petals, three sepals. The siblings go to see the flower “shimmering white . . . Like stars, whose light is both / a wailed call and a calm response.”

Call and response, among other things, is the form of work songs used by chain gangs, gandy dancers, sailors when the work of driving spikes or raising sails has to be coordinated. In this poem it’s a melding across boundaries, wailing answered by calm.

Ornament is full of such oppositions and boundaries. Even the cover appears to be a topographic map done in embroidery, an indoor craft creating an image of the outdoors. A glance down the table of contents finds poems entitled “Piedmont,” “Mapping,” “Unhomemaking,” “Bonaparte Crossing the Rhine,” between two poems entitled “Girl at the State Line.” The second so-named poem speaks of a long-lost photograph: a girl who stands straddle the line between North and South Carolina, ‘between her patent shoes she finds the border, ghost-line superimposed on scrubby grass.” The first so-named poem seems to echo Wallace Stevens’s “Idea of Order at Key West” in the sudden appearance of a companion asked to solve a mystery, Ramone Fernandez become Virgil Anderson, a “border walker” asked the question, “can I pledge allegiance to limit and endlessness both?”

A mountain doesn’t recognize a boundary line, “land does not brake for state lines.” Neither does music. Or poetry. This beautifully crafted book ends with a Blakean image of innocence observed by experience, a black-eared kitten

who, once she has eaten, steps into the blue
porcelain bowl, curls up, and never thinking
she herself could be eaten, sleeps and sleeps. (“Hush”)

And where does that leave our banjo player? In “Roustabout” (a circus worker), she circles back to that gaudy, ornamented God, asking the same questions: “Say truly, God, are you the kind / to wear a sequin?   . . . Must you send silver down / the sweep of every dress you own?” She turns again to deer as spirits of the dusk: “Do you hop high by moonlit pears?” Once again the answer is in a melding: “Let buttons shine from stubbled fields,” to end in the magic of “a well-spun spell.” Because, “Girl at the State Line” #1 warns us, rickrack trim sewn quickly onto a store-bought skirt “won’t last long . . . the way we dance down here.”

Sherry Chandler’s third full-length poetry collection, Talking Burley, is forthcoming from Main Street Rag. Her poems and reviews have appeared in The Cortland Review, the Louisville Review, Rain Taxi, Rabble Lit and others. Her work has been nominated three times for a Pushcart and twice for Best of Net. She has had awards from the Kentucky Arts Council and the Kentucky Foundation for Women.