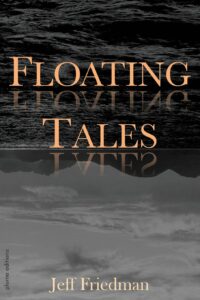 Jean-Paul Sartre wrote, “A man is a teller of tales, he lives surrounded by his stories and the stories of others, he sees everything that happens to him through them. . .”  Most poets know this.  Existentialism is as much a wrestling with the human condition as it is another story. Depending on the character and quality of the stories these could rise to a claustrophobic, tragic fate, or one that liberates through yet to be discovered possibilities. In Jeff Friedman’s new book, Floating Tales, he chooses the latter strategy. There are absurd truths, but truths just the same even as they contradict themselves in the best sense that the opposite of a profound truth maybe another profound truth, and also the aesthetic revelations that can only be found in the crazy prose-poem world that Friedman writes.

In the opening prose poem, White Feather, the poet describes his modus operandi.  Whatever is to follow, it is not the work of magic, not even a magician pulling a rabbit or dove out a hat or from up a sleeve, but something more primal, more visceral, it is coughed up feather by feather out of the poet’s throat, as the poet composes his flight, the flight of each poem, and the flight of this absurd world as it escapes its creator, the poet:

After Alexandra kissed me, a white feather flew out of my mouth.  . . .Alexandra seemed concerned, “Did you eat a white bird?”. . .but this time, a white dove flung itself from my mouth, flying wildly around the room until it hit the window and fell on the floor. . . . “We’ll figure this out,” she said, squeezing my hand, but I could already feel a tickling in my throat as the dove began singing. (from White Feather)

As the poet is driven to sing the world it is transformed, unexpectedly transmogrified, into beauty and tragedy. Yehuda Amichai writes of this existential dilemma: The song of the turtle dove mourning/is the song of the turtle dove wooing. There is often an ominous quality even in the most prosaic pursuits that lead to surprise and disintegration.  The author assembles fantastic tales only to disassemble them, then reassemble them into even more impossible worlds, and yet the reader will find her-or himself believing in their possibilities and often laughing along the way.

The title, Floating Tales, is a warning as much as it is description of what is to be found in these brilliant prose poems.  First the warning, these poems float in, through, around, above, and under the world that we think that we know. They are often Biblical in their inspiration but in a completely new context, as in Pillar of Salt, a modern day version of Lot’s wife:

When mom turned into a pillar of salt, Dad told us to leave her behind. . . . “Your mother couldn’t stop obsessing over the past.” I lifted her up and positioned her on top of the Subaru and began strapping her down. . . . “She’s like old smoked salmon, like a Jewish mummy, like a coffin floating in the mist, like an open cask of wine, like a petrified pillow case, like a barrel of querulous frogs, like seven plagues on our future. Need I say more?”

Even if we are turned into pillars of salt we will not stop being repurposed but we can’t escape the import of the old story.

These floating tales never remain long enough in any one place moving from the living room to the yard to dark interiors of the mind, not allowing the reader to feel any kind of certainty, unless comfort can be found in a world of uncertainty, and yet they free us from the definitions of self acting in this world. The reader must be prepared to laugh as he or she drowns in this nonlinear, non-logical, out-of-balanced world, a world without a center of gravity, a world where a wife can fly and the parrot refuses to leave the ground:

“Be a bird, be-a-bird, be-a-bird,” he (the parrot) sang. My wife beat her wings (arms) faster and faster and suddenly she rose off the ground floating up to the light fixtures. “Damn,” I said. “Damn,” the parrot repeated, waddling out of its shelter, holding up a wing in admiration. (From the poem Parrot.)

To what world’s end is this borsch-belt imagination struggling to describe. Can’t we just laugh, must we excavate some meaning?  Well, yes to both. Book-ending this collection of tales are the prose poems Nothing and Whole World in His Hands. Looking for a ground of being, Jeff Friedman has written a series of tales and narratives that have the energy and sudden surprise of a Jack-in-the-Box imagination where the unexpected becomes expected, if not mundane, and the unimaginable is described in the most common every day terms..  But this Jack-in-the-Box is not a toy, it is a matter of making sense of our lives even as we turn the handle listening to the tinny circus music that is about to unhinge our most cherished illusions and upturning most everything we believe.

In reading Floating Tales, we are reminded that the best poems are a way of awakening to something just beyond what words can say as in Strip Poker, where the narrator describes his accumulating existential losses, and ultimate liberation perhaps into nothing, all resulting from a card game:

Let’s keep going, she says and deals another hand, then another and another and another until off come the tattoos spreading across the floor: an orange crossbow, a wolf’s head, a Moorish façade. . . the complete Dead Sea scrolls in microscopic print, and a map of the ‘80s. She turns over the cards until I discard my costume of flesh, my bones, my fountain of blood and step out of myself into the air.

The narrator says earlier in the poem, “ We live and dress in layers. . .but now there’s not much between me and the world.”  What’s left after we are stripped down to what we thought were essentials are now gone─without the armor of our culture, social standing, physical presence, and have gone beyond our limits, until there is nothing left?  Perhaps more Floating Tales that are trying to answer these fundamental existential questions, or, perhaps the naked, unbridled, wild imagination of Jeff Friedman, as we stand in the swirl of a malignant maelstrom of our own devices in the twenty-first century. When so much today is steeped in futility and hopelessness, it is Friedman’s flights into the darkness of confusion and chaos that turns into an ironic celebration of the one thing that might save humanity, or destroy it, our imagination, our last best stand against the incomprehensible journey we are taking and one where we can’t turn back to the “good old days.”  The narratives of Jeff Friedman’s Floating Tales will leave the reader dazzled, spinning in an ever-changing kaleidoscope, where we may not understand our lives any better but we will feel them so much more deeply, and blessed with a moment of liberation.